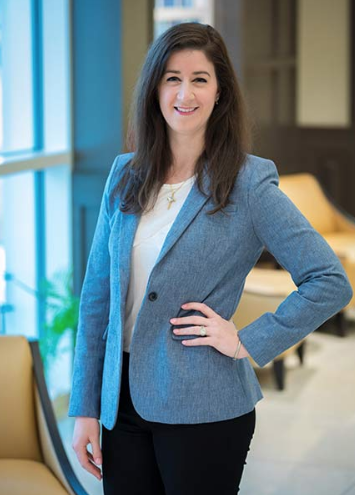 Newly hired as a full-time assistant professor of music at Oklahoma Baptist University, Kelsey D’Emilio has set up her office to be nearly as soothingly cheerful as she is. Visitors and students stepping into the office are greeted by the sight of soft pastel paintings, a large pastel floral painting on the wall, Victorian-esque chairs and a table lamp surrounded by a shade of little teardrop-shaped prisms.

“She has the greatest office in Raley, I think,” professor of music and dean of the Warren M Angell college of fine arts, Dr. Christopher Mathews said. “It’s like out of a magazine or something, you know, it’s beautiful.”

The close of the spring 2019 semester marks the conclusion of D’Emilio’s first year as a full-time faculty member at OBU, although she has served as an adjunct professor at OBU, prior to joining full-time for the 2018-2019 academic year.

“I never really thought of teaching as something that I’d want, or thought I knew how to do, I guess,” she said. “Even though my masters is in pedagogy and performance, I was really performance driven the whole time. So, it was a new adventure for me – to do that professionally.”

After starting as an adjunct, at OBU, she found that she enjoyed teaching at the college level. “The first day, I was sitting there, and I came home, and I absolutely fell in love with this,” D’Emilio said. “This is the greatest job in the world.”

The journey that led her to the role of collegiate assistant professorship was a winding one, although she knew she loved music from a very young age.

“I always was like a kid, [who] sang and hummed before I spoke, like as a kid. So I [always] was attracted to music,” she said.

However, at first, she was self-conscious about her voice.

“I didn’t sound like any of the kids in choir at church,” she said. “And so, I didn’t ever sing out in church choir – because I sounded different.”

It was only a little while later, that she began to confidently embrace her singing ability.

“I was in the car with my parents. And they put on an album that was, had an opera singer on it, but singing something, not from an opera, but like she was singing operatically,” D’Emilio said. “And I [thought], ‘Well, I can do that.’ I was about 10, and my parents said ‘Okay, sure.’ Then I started singing like myself, as opposed to making my voice sound differently like the other kids sing in choir.”

“Finally, when I decided to not compare myself or change myself, I was able to pursue the gift that God gave me,” she said.

Now, as a voice instructor and music professor, she helps students embrace their own natural voices.

“As humans, it’s really easy to compare ourselves,” D’Emilio said. “And then that’s how we feel about ourselves – it’s just the comparison, which is not ideal for something.”

These kinds of comparisons can give music students inaccurate ideas as to what their singing should sound like.

“It can be demotivating,” she said.“It can give us false expectations, what our voice should be able to do,” D’Emilio said. “God made each one of us uniquely. And what we need to do is bring out who He made.”

She encourages students to consider their voice as part of being fearfully and wonderfully made.

“Our voice is a gift from God, and to try to alter it, or change it or compare his gift to another gift that he’s given,” D’Emilio said. “It’s just not something that I encourage them to do.”

For D’Emilio, that incident singing along with an operatic singer in the car as a child helped her begin to realize her vocal potential. It also helped spark a love of opera.

“It’s just a really exciting and powerful medium of art that I feel I really just connected with,” she said. “It’s the whole experience.”

Like other art forms, opera centers around the human experience.

“[Opera is] human stories. written and performed by humans,” she said. “It just happens sometimes to be in another language; it happens to sometimes be in a style that’s from another musical era and they’re just told so beautifully.”

As an Oberlin College and Conservatory student, D’Emilio trained as a classical vocal performer.

“I knew from a young age that that that was my calling was something in music,” D’Emilio said.“And I thought at the time it was performance, I just didn’t realize that my stage would eventually be the classroom and not the operatic stage alone.”

After getting her master’s degree, she moved back to Oklahoma with her husband.

“We both were pursuing professional opera careers and then he wanted to go to law school,” D’Emilio said. “And so, he moved us here to Oklahoma, so I could be near to my parents.”

It was in Oklahoma that D’Emilio started teaching voice.

“I went out to lunch with one of my old musical influences,” she said. “Now, friend, previously teacher, and the Holy Spirit was kind of sitting in on our conversation.”

A week later, she received an email from OBU offering her a job as an adjunct faculty member.

One of most difficult challenges for D’Emilio was developing how to grade vocal work.

“Quantifying vocal growth in a letter grade, I think that was something hard to kind of make something subjective, objective,” she said. “And so I’ve gone through making a bunch of rubrics, and that’s been really helpful.”

One aspect of the work she feels strongly about is encouraging students to enjoy their work.

“Oftentimes, the work that needs to be done can overcome the original thing that brought us to music which is to sing for the joy of God,” she said. “I always ensure that my students [think of] 10 reasons why [they] love singing for [their] next lesson.”

This view of music as for the glory of God can be seen in D’Emilio’s own life and work.

While students may have difficult times in their studies – especially at the end of a long spring semester, it’s about continuing to try.

“You know, you can climb the mountain, you can just do it one step at a time,” D’Emilio said. “But you have to take the first step.” “