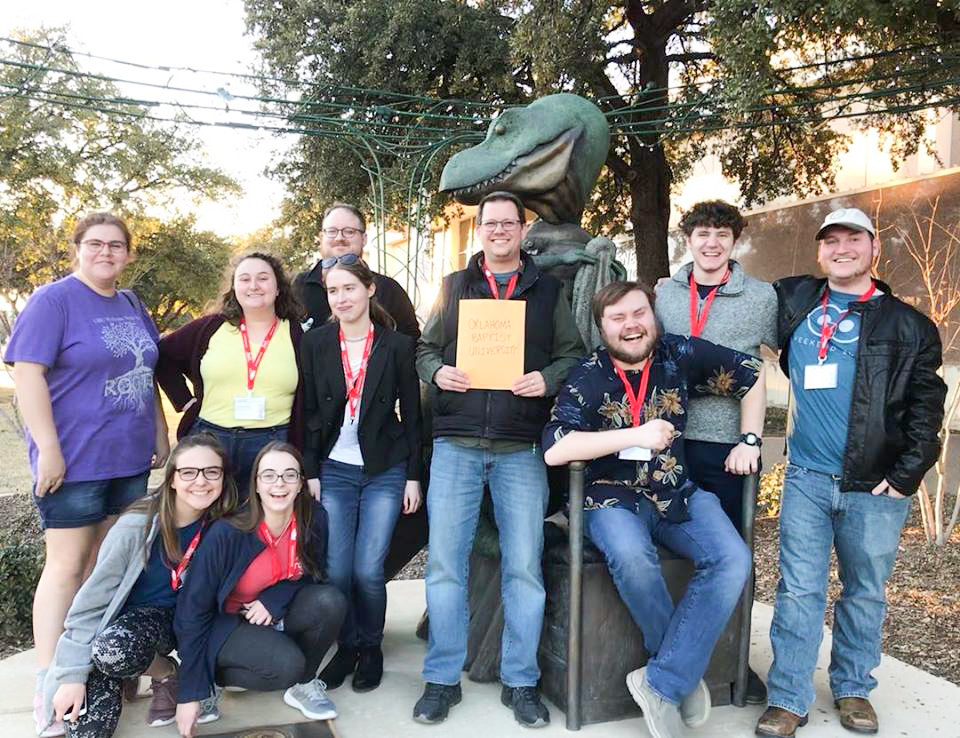 Last week, a group of seven OBU students and three faculty and staff members loaded into two vans and drove to Abilene, TX.

They were on their way to attend the Kennedy Center American College Theatre Festival’s Region 6 Conference February 23-March 1. The weekend after their return, several of the students shared thoughts about the trip with The Bison via email.

Below are some of their responses, lightly condensed and edited for clarity.

The Bison: What were some of the blessings of going to KCACTF Region 6 this year?

Greathouse: I was able to connect more with the members of the department that also went to KCACTF. Also, I learned many skills that will be incredibly helpful as I continue in a Theatre major such as auditioning skills, stage management skills, and working in a large theatre.

Hendrickson: Personally, I’m glad I was able to go to the festival in the first place. I have been going to KCACTF every year since I was a freshman (and not even a theatre major at the time, but that’s a story for another time). So, I’m glad that I was able to round up my time here at OBU with one more trip.

McGee: My scene partner and I were selected to move on to the semifinal round of Irene Ryan’s, which was simply amazing. We weren’t expecting to move on past the preliminary round. Another blessing was seeing how much everyone was achieving at the festival. I especially liked reuniting with people I hadn’t seen since high school.

The Bison: What were some of the toughest parts of going?

Greathouse: Personally, as part of the Honor Crew, I was required to be there at 6:30 am every morning to help load in and load out shows that were being presented at the festival. While being part of the crew was a blessing, it was hard to run on only a few hours of sleep but still be present that early in the morning. Being mentally present was important because safety is the most important thing and the load ins often involved using the fly system (which can be danger if one is not aware of their surroundings). Overall, it was a positive experience, but it was definitely challenging.

Hendrickson: The toughest part that I have found is making sure to stay on top of the classwork that I am missing by coming to the festival. Since it’s a school-sanctioned event my absences are excused, but I still have to find the time to get it done during some downtime at the festival.

McGee: Irene Ryan’s were definitely difficult, because there was a lot of work to be put into the acting. It was pretty stressful for me, and I lost some sleep because of it.

The Bison: What are some of the things you learned?

Greathouse: I learned many things at the festival this year including operating an automatic fly system, auditioning skills, how to correctly write performance and rehearsal reports (for stage management), and the best recipe for Totally Washable, Non-Toxic Stage Blood.

McGee: I learned just how truly diverse the theatre community is, even among other college students. I also learned that it’s important to be as coordinated with your partner as possible, whether that be in acting or color-coding.

The Bison: Describe something that surprised you about KCACTF Region 6 this year.

Greathouse: Something that surprised me at KCACTF this year was the vastness of backgrounds, talent, and choices made by those around me. There is a huge vastness of talent from our region, and it was surprising and wonderful to see how God blesses humanity with good things, even if the people He blesses are unaware of the fact.

Hendrickson: What surprised me the most was how much easier it was to network at this year’s festival, as compared to previous years. In years prior, the festival was hosted at Angelo State University in San Angelo, TX. And so, you would have various areas where various workshops and competitions would take place, but you were also surrounded by a bunch of normal students that weren’t there for the festival and so it was a lot harder to see someone that you had met earlier in the week. Having it at a convention center meant that we were the only people there and were a lot more compact. So, it was a lot easier to run into people that you had met during the workshop earlier that day, and that is what I experienced this year.

McGee: I was surprised by the sheer amount of people that were at the festival. It was so refreshing to see hundreds of fellow thespians in the convention center. OBU has a relatively small theatre department, so it was crazy to see jus this many more people there could be working on a singular show or representing a university.

The Bison: What was your favorite memory from KCACTF Region 6?

McGee: Watching my close friend, Caleb Frank, perform at the final round of the Musical Theatre Initiative. He sang beautifully and was engaging the audience spectacularly. I was and am very proud of him, especially since he placed third overall!

Greathouse: Three of my favorite memories would be (1) the laughter, pure enjoyment, and fun moments that happened in various workshops, restaurants, and experiences throughout the festival; and (2) the costume parade. OBU was given the opportunity to display three costumes from the fall production of A Midsummer Night’s Dream. It was fun to see reactions from others backstage about the costumes. One woman even asked for a picture before we went on. It made me proud to display the hard work of the costume department and have it appreciated by people who understand the hard work and preparation that goes into each costume. (3) The final memory that I will treasure for a long time is a prayer meeting we had as a department on the second night of the festival. We had just learned that two of our teams had advanced, one to Irene Ryan semifinals and one to MTI finals. We took ten minutes, sat together, and prayed.

Theatre is often looked on as being very liberal and inappropriate, but this week, we were able to show the light of Jesus Christ through our interactions, our character, and our choices.

We wanted to make sure that we had our focus on glorifying God, not ourselves, and it was a sweet moment of unity and togetherness for our team.

The Bison: If you could only say one thing about KCACTF Region 6, what would it be, and why?

McGee: KCACTF is worth the cost. While the trip may cost a bit from your wallet and time away from classes, I say it’s worth it because of how beneficial it is to get involved in the events at the festival. You never know what’s going to happen!