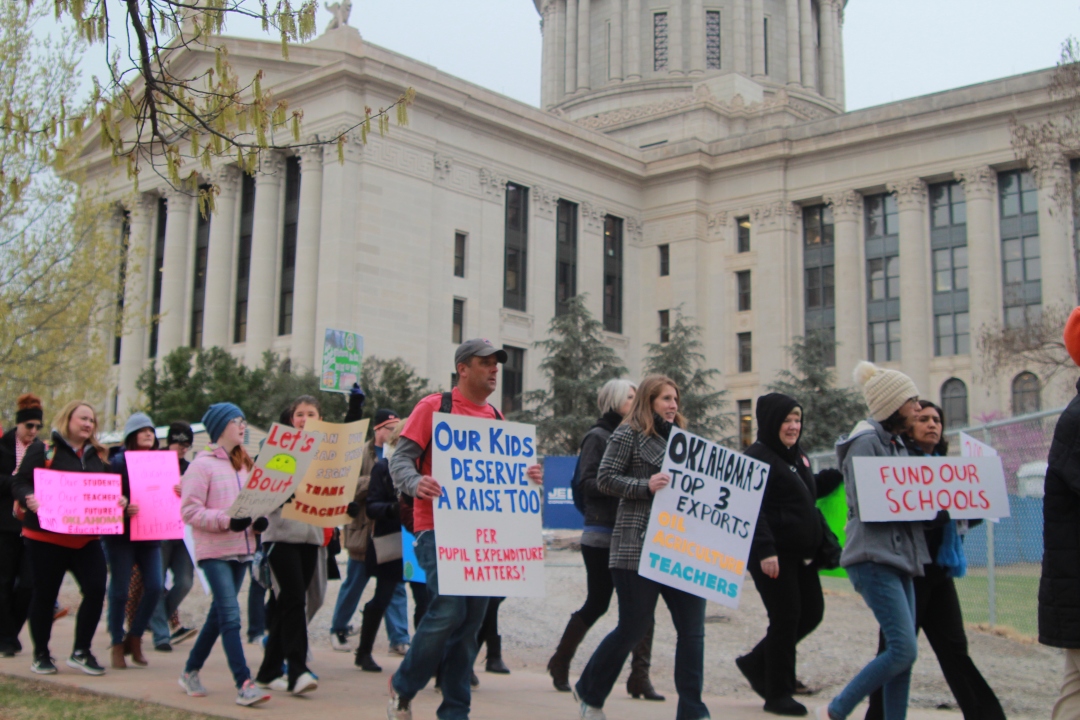 Desks were empty, and classrooms were closed as students and teachers rallied together at the state capitol Monday and Tuesday.

Hundreds of Oklahomans walked to the capitol with signs in hand, a desire for change and the opportunity to see history in the making.

The last time there was any change within the Oklahoma education system was in 1990 with House Bill 1017, or Education Reform Act of 1990. This bill provided more than $560 million over five years to implement a wide variety of education reform policies.

Meanwhile, there is a major teacher shortage; over the past three years, over 2,600 emergency teaching certifications have been issued, leaving classrooms over-filled and teachers underqualified.

According to Education Week, Oklahoma ranked 46th in the nation for education.

For more information on salary comparisons, see the chart on page 8 provided by Bryon Schlomach, director of the 1889 Institute.

Due to a lack of funding, the Oklahoma Educators Association (OEA) seeks a $10,000 pay raise for educators along with various other benefits. Although the Oklahoma House and Senate passed Bill 1010XX, which includes a $6,100 raise and money for funding, the OEA refuses to back down.

For many, this has become an issue less on focused on the money and more on the students who are currently being impacted. For these educators, the entire issue has not been addressed.

Many OBU alumni work within the education field in Oklahoma and describe their experiences and their reasonings for change.

Blair Workman, a 7th and 8th-grade reading teacher at Guthrie Junior High School, graduated from OBU in the spring of 2015. Within her classroom, Workman battles black mold, cockroaches, broken desks, inadequate room sizes and asbestos in the floors.

“I am sad it has come to the point of walking out of the classroom for the needs of our kids and teachers to be met,” Workman said “I am angry teachers are so often equated to martyrs when we are expected to be professionals. I am tired of the weeks of speculation and ready for actual action. I am hopeful that the teachers of Oklahoma will stand united and not settle for less than what we need.”

Kristen Keeney, a 9th grade English teacher at Northwest Classen High School, graduated in the spring of 2015. Keeney doesn’t want to walk out but sees it as the only way for change.

“No teacher is supporting the Walkout because we want our students to miss school,” Keeney said. “We support it because we have gotten to a point where we are having to apply pressure to the legislature in order to receive funding that our schools and students desperately need.”

Ashley Gillett, an 8th-grade language arts teacher at Tecumseh Middle School, graduated from OBU in the spring of 2015. Gillett said she believes this to be a situation that will require much determination before an acceptable solution is available.

“More than anything I want my students and the future generation of Oklahoma to have ample funding so that they can be successful and feel that they are worth it,” Gillett said. “Yes, a teacher raise is ideal and extremely beneficial, but I’m also fighting for my current and future students!”

OBU educators also weigh in on the impact that this standoff can have and the need for change.

Dr. Pam Robinson, dean of the College of Humanities and Social Sciences, has worked at the State Department of Education and spent over 20 years teaching in public schools and higher education. Although Robinson agrees that a raise is in order, her main concern is the children.

“I know no teacher wants this walkout to happen, but I am greatly concerned about the impact on our children and frankly, on our state if something doesn’t change,” Robinson said. “Most people think it is about the money, but it is about creating an education system that prepares children for tomorrow, one that entices industry growth in the state.”

Dr. Ezell, assistant professor of English, has taught for 15 years and supports the teacher walkout because the effects of a quality education can impact all aspects of a students life.

“In order to have success in Oklahoma, we have to invest in education,” Ezell said. “And I do not mean just economic success, but also a citizenry that values art, people and civics. Our teachers are on the front lines trying to instill these ideals, but they cannot be expected to take on such a task at a discount rate. Because many teachers enter the profession because of the calling more than the money, it is easy to neglect the job they do and the time they put in–yes, even during summer.”

Dr. Terry James, chair of the division of education, has 40 years of experience teaching in public schools, 30 years working as an administrator and eight years at OBU

In 1990 when trying to pass House Bill 1017, James was working as the Assistant Superintendent in McAlester and said he was reluctantly discussing with his wife what state they would move to if the law didn’t pass.

“It wasn’t money; we wanted an education system we trusted for our children,” James said.

James believes that the demands from the OEA are based upon the need for a compromise and will go to benefit other service providers in relation to schools.

“The vast majority of teachers do not want to walk out of their classrooms,” James said. “Many feel it will be the most difficult professional decision they have ever had to make. At the same time, they see what is occurring in their buildings. They have larger class sizes; fewer resources, such as textbooks; fewer supports, such as teacher assistants; fewer fully qualified colleagues teaching in the classroom next to them.”

The walkout affects more than teachers, administrators and students.

“Even if people do not have kids in school, they still might be supervising those kids where you work, they might be a coworker to one, or they might be a neighbor to one,” Ezell said. “The failure to address the problems in public education has ripple effects that will eventually be felt beyond those who are directly involved. Public education has always been a buoy for the community and ensures that students are able to take on the responsibilities of leadership as they get older.”