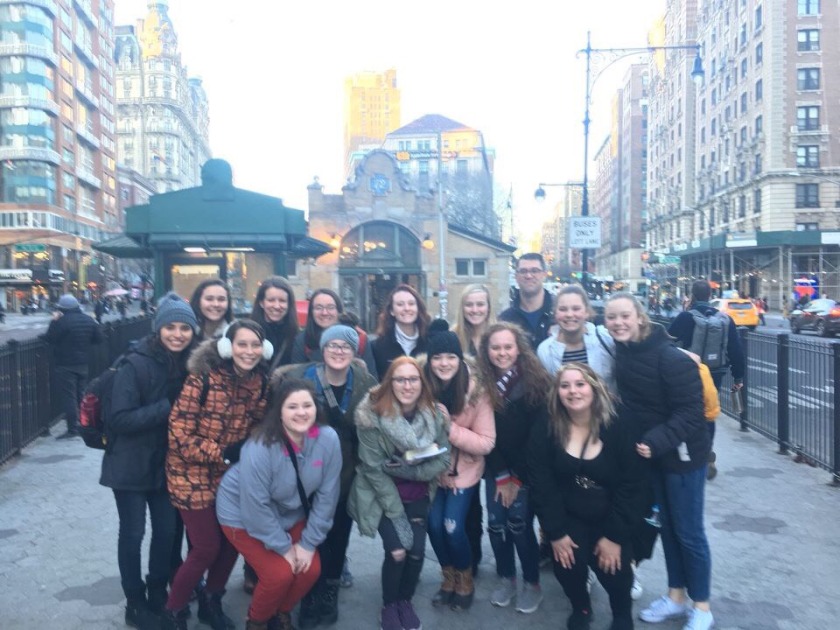 Every year, OBU’s Global Outreach Center takes a team of students on a GO trip to a location in the United States during Spring Break. This year, a GO team traveled to New York City to spread the Gospel.

The team was led by Student Ministry Associate, Taylor McLaughlin, and Lanie Allred, the resident director of Taylor Residence Center.

Among the team’s members was student Abigail Wendt, who said she originally planned to travel to Hawaii during spring break to visit friends and help with ministry there.

“However I talked with my friends there, and some things had come up that the trip was not going to be as beneficial for them if I had come,” Wendt said. “The next day I received an email about the trip to New York.”

Wendt said she had traveled to New York before, nine years prior, but at the time was scared of the people there.

“I felt like this is where the Lord wanted me to go,” she said. “I was nervous and excited about the opportunity to not only interact with the people, but to go and get to engage them with the truth, so I immediately emailed Dr. Turner back and began preparing to go.”

Junior Samanthah McCreary was also nervous about traveling to New York but was excited to be a part of the trip.

To prepare for the trip, the team attended orientations three weeks in advance to learn about the different cultures they would encounter in New York, and how to engage with them.

“There were a lot of prayers involved,” McCreary said. “We had to fundraise to get the money necessary to go.”

The team worked with two churches in New York during the trip.

“For one of them, we worked with an after school children’s program where we got to help kids with their homework, play with the children and do some hands-on ministry,” McCreary said. “When we worked with the other church, we got to go out into the streets of New York and we passed out free granola bars along with ticket invitations to the church.”

Wendt said she especially enjoyed working with the children the team cared for.

“We would go to the schools and pick up the kids and then come back to the church, helping the kids with homework and playing with them, and then we would do a Bible study and small groups, or prayer groups, depending on the day,” she said. “Out of all of the kids that attend the after-school program, not one’s family attended the church. So, to get to pour into them and teach them about God where they can then take it back to their parents was amazing to get to be apart of.”

Wendt also said one of her best memories of the trip came when the team was passing out granola bars, and she gave one to a man on the street who she said reacted in disbelief at first.

“He asked if I was sure, and after reassuring him, he said, ‘Thank you so much, this will be the first thing that I have eaten in three weeks that has not come from a trash can,’” Wendt said. “It was a heartbreaking experience, but also was great to get to bless that man.”

Additionally, Mc-Creary said she enjoyed getting to encounter the different cultures that make up New York City.

“Although it’s another U.S. state, there’s actually a lot of different cultures,” she said. “It was nice to get to meet the people on the streets living their daily lives and talk to different people.”

Both McCreary and Wendt encourage other students who are considering taking part in a GO trip to go ahead and “do it”, but not to overthink it too much.

“Do not let fear of any kind stop you, just pray about where the Lord wants you to go, and do it,” Wendt said. “It will seriously change your life, while the Holy Spirit uses you to change others.”