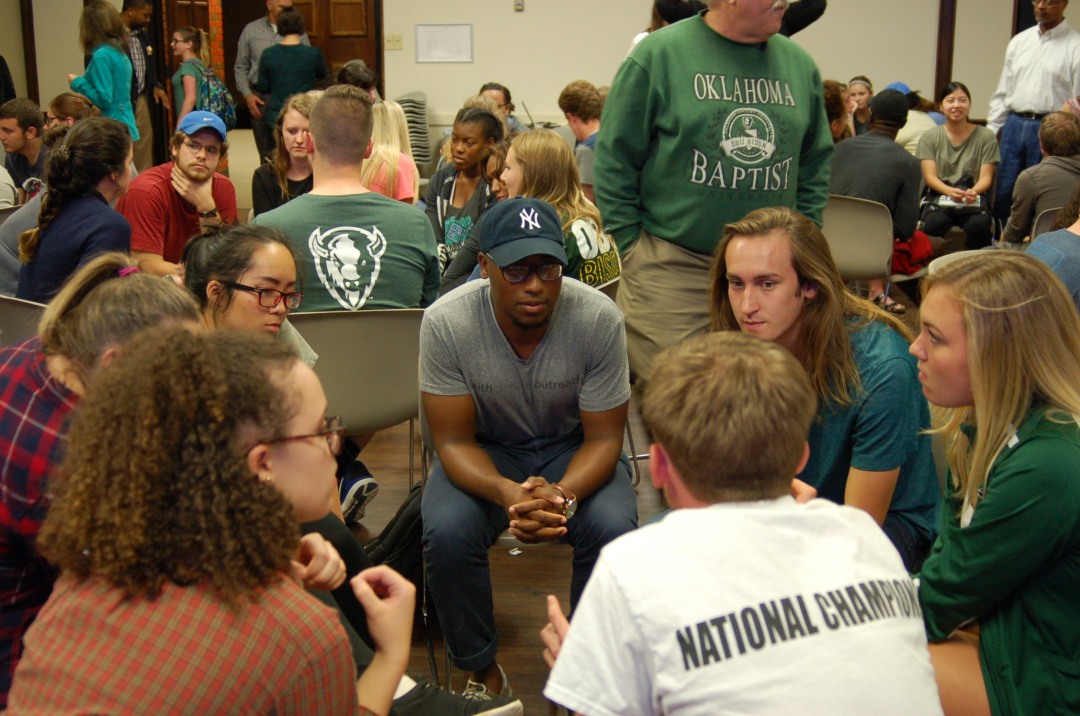 Let’s Talk: How to have a civil discussion A series of conversations on hard topics

Emotions dominate most conversations regarding controversial topics from gun control to immigration policy.

How then, in this explosive climate, does one have a civil discussion concerning important issues?

Director of forensics and debate Scot Loyd, who has coached OBU’s debate team to a fifth place national ranking in its first year of existence, said that shouting matches are not real argumentation.

“An argument in a formal debate has three important characteristics,” Loyd said. “Claim: states the speaker’s conclusion about some state of affairs. ‘What are you trying to prove?’ “Evidence: ‘What is the proof of your claim?’ Warrant provides reasons or justifications for why the evidence supports the claim. It allows audience members to evaluate whether, in fact, the evidence is valid for the claim (or warranted).”

While the terms ‘argument’ and ‘civil discussion’ may evoke different feelings, at the heart of both lies a similar virtue – listening.

“Civil dialogue and argu-ment shouldn’t be considered mutually exclusive terms,” Loyd said. “As Christians, I believe that all our arguments should be framed as civil, which means that we ‘seek first to understand, then to be understood.’”

“Civil dialogue is governed by the discipline of not offering a critique or challenge to an opposing or different position, until we can first articulate our opponent’s position to their satisfaction. Then and only then are we qualified to challenge that position.”

According to Andrea Leskes’ periodical “A Plea for Civil Discourse: Needed, the Academy’s Leadership,” published in “Liberal Education,” ‘civil’ (as used in ‘civil discussion’) does not necessarily imply politeness or cordiality.

“One should not expect civil discourse to create a feeling of comfort; discord causes uneasiness, and a challenge to deeply held opinions in-duces pain,” Leskes wrote.

On a deeper level than mere pleasantry, according to Jennifer Linde’s essay “Civil Dialogue: Producing Civility Through the Process of Dialogue,” civility “operates as a mechanism of citizenship.”

Essentially, as a civilian of society, one’s civility describes his or her successful interaction with the rest of society. Therefore, civil discussion, or discourse, can be less than polite as long as it is constructive for society.

“Every issue is controversial to someone,” Loyd said. “So, avoiding controversy for the sake of controversy begets further controversy. What is ignored doesn’t go away, it gets worse.”

However, just as avoiding conversation exacerbates the problem, so too does engaging in emotion-based argumentation. One subset of politicians in particular has become a prime example of this principle.

In her book “Toward a Civil Discourse,” Sharon Crowley said that fundamentalist politicians have the tendency, whether liberal or conservative, to defend their ideals at all costs and without reflecting upon the validity of these intensely-guarded beliefs.

“Typically, this is accomplished either by rendering opposing claims unworthy of consideration and/or by excoriating the character of people who disagree with one’s founding claims,” Crowley wrote.

Loyd said that this practice of hardening oneself against any and all opposition, and refusing to compromise, is what leads to extreme polarization.

In their book “Winsome Persuasion: Christian Influence in a Post-Christian World,” authors Tim Muehlhoff and Richard Langer said one thing which, according to church historian John Wool-bridge, has contributed to America’s aversion to compromise is “war language.”

This culture is not one that properly embodies what is called the “public square.” Public square is a metaphor for the atmosphere of conver-sation in a society. German sociologist Jurgen Habermas said the public square ought to be a place where “publics” (majority opinions) and “counterpublics” (minority opinions) can meet and have civil discussion.

“It must be open to all who want to participate; it must address issues that affect the majority of people; it should be free from manipulation or coercion; and, perhaps most importantly, opinions must be presented rationally,” Habermas said.

This public square doesn’t exist only in formal debate situations, but in the literal public squares of a society, where impromptu conversations about various topics might come up over a cup of coffee.

Loyd says that, as Christians, we must “seek out [the] diversity” of public squares and not “remain cloistered” with those who only think similarly to us.

To answer the opening question then, civil discussion can and should be had when each side comes with an open mind and a listening ear.

This includes being open to having conversations about hard topics, which are generally avoided, when approached about them.

According to 1 Peter 3:15: “But in your hearts revere Christ as Lord. Always be prepared to give an answer to everyone who asks you to give the reason for the hope that you have. But do this with gentleness and respect.”

In the spirit of civil discussion, students are free and encouraged to email topic suggestions for coming Let’s Talk articles to jonathan.soder@okbu.edu