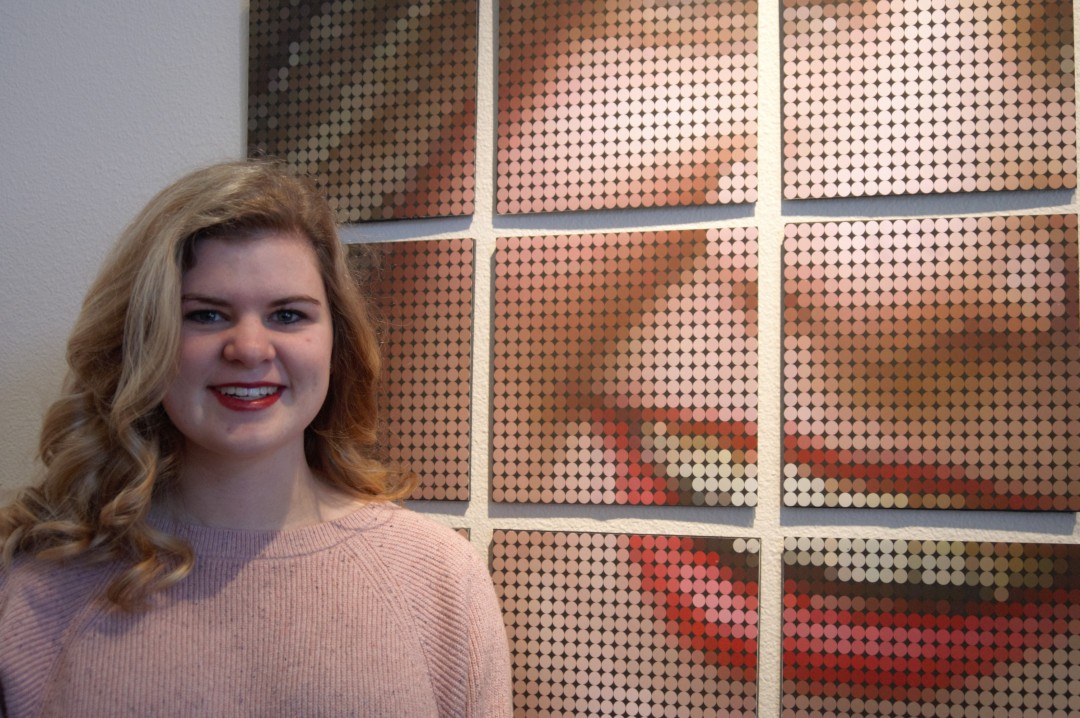 Art has always been a force of change in the world. Throughout time it has challenged people to re-examine the world around them. It challenges the routine and demands of people to ask questions – even to take a stand.

Crow’s “1029: Who is My Neighbor” magazine series is haunting.

Images that show PTSD or No Shave November represent how the smallest actions and decisions affect those around us, even those on the fringes of society.

When I first came through the door, I saw photos from Israel, New York and Hawaii. The plaque next to these photos states, “each of these places has had a significant impact on my life, and I am who I am today because of them.” This demonstrates how certain events can have a huge affect on the rest of people’s lives.

There are pieces that represent change throughout history and cultures in the exhibit, including a charcoal of a Vietnam veteran and another, this one with more stark detail, of a woman in a burka.

Crow will definitely accomplish her dream of changing the world through representing the raw pain of the people in the cracks of society.

However, the exhibit is not just a serious collection of pieces. The package design, called “Finals” is disturbingly accurate at representing a physiological freak-out from finals week.

The package design genius does not stop there, however. A throwback package design to the 90’s will make the twenty-somethings want to pump their fist. When she was looking for a theme, she said she decided to represent the different aspects of change in her art.

“I had toyed around with some different ideas and I wanted to do something that involved change,” Crow said.“My first cheesy idea was ‘inspire change’ but I was like, I need something that’s gonna be more impactful than that because a lot of the pieces that are in my show have to do with change and changing the world around us and how things have changed or changes that you go through in life.”

“So, I chose ‘the ripple affect’ because one small drop of water can cause a big change in its surroundings and water’s always changing. That’s what I want to do with design is to be able to impact the world around me and to leave it better than how I found it.”

The act of creating can be hard. While some may not understand the energy it takes to sit down and start on a piece of art, people should be aware of that struggle.

“There was definitely hundreds and hundreds of hours put into the show,” said Crow. “Just because we’ve all worked so hard and I think a lot of people don’t give art majors and graphic design majors the credit that [they’re due]. There are lots of late nights and you have to constantly be creative and that’s so draining. And no, it’s not comparable to a physics major but it’s hard in a different way. In a way that someone who is outside of that world wouldn’t expect. Even if you’re tired, you still have to continue.”

She encouraged others to go see the art shows put on by the other senior art students.

“If you can’t make it the opening night, just go check it out because we’ve all worked very hard and we want people to see our art,” Crow said.

Corey Fuller, associate professor of graphic design, has helped guide Crow’s talent and growth as an artist over the past year-and-a-half.

“Madi took a unique path-way—she started out as a Math major before switching over to Graphic Design. I think you can still see some of that analytical problem-solving ability in her current work.”

“[She] is a very driven person, not only in a classroom context, but she lives life with a sense of urgency. She has several causes that’s she’s passionate about. I can see her in the future using design as a tool for advocacy. She understands the power of design in influencing people. I imagine she’ll continue to use her skills as a positive force to make the world a better place.”

Another of Crow’s teachers, assistant professor of art Julie Blackstone enjoyed having Crow in the classroom with her other students.

“I had Madi in a drawing class over J-term,” Blackstone said. “And I can tell you she has many talents beyond graphic design. She did well with her drawings, of course, but one of her strengths that I valued was her ability to mentor and encourage other students. I could always count on her to say something helpful during critiques. I can only imagine success for Madi. She has the talent, poise, drive, and personality to do well in the graphic design field.”

According to Blackstone, there are several benefits of an art degree from Oklahoma Baptist University.

“The senior show is a required capstone project for all art majors,” Blackstone said. “Frankly, it’s one of the wonderful benefits of being here at OBU, a smaller art program. At many larger schools, seniors may submit to a senior show, and hope to get one or two items included. Here the senior gets a solo exhibition. The reception isn’t part of the requirement–it’s an expense that some students would rather avoid–but the show is required.”