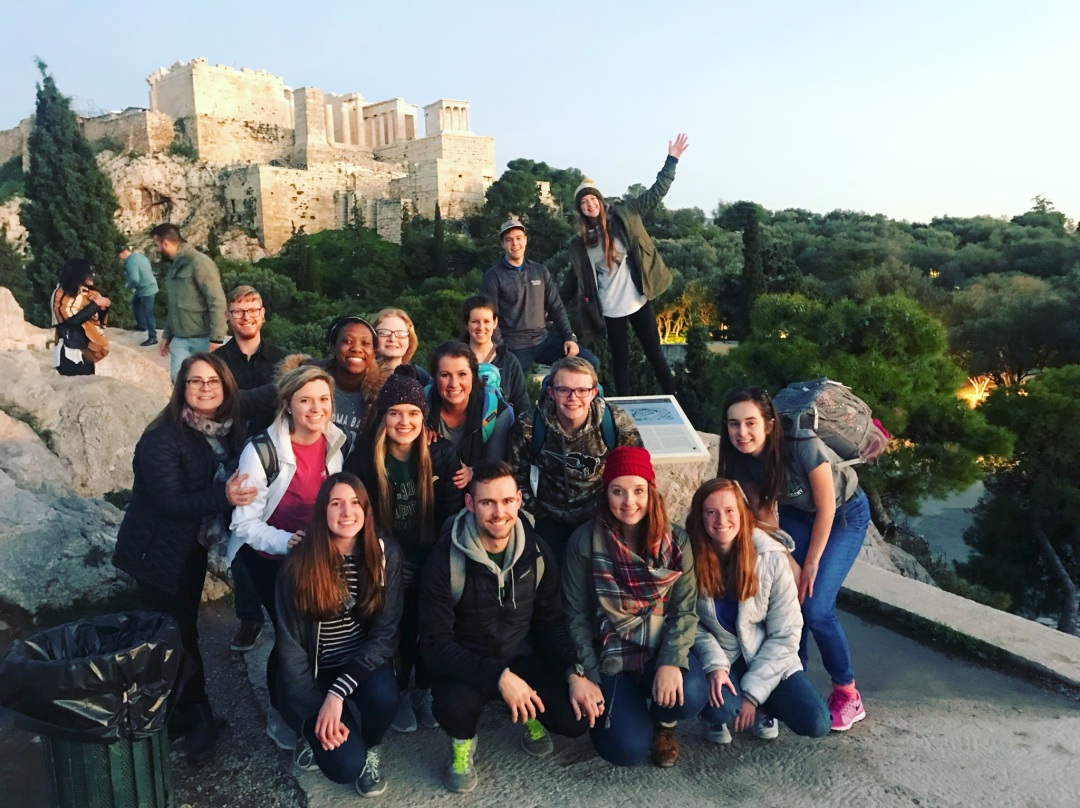 Students start 2018 by going to the nations

Two weeks ago, OBU reopened its doors for the spring semester. Many students spent their J-term on campus taking classes, and others decided to spend their break traveling.

Some OBU students, however, traveled not just for pleasure, but to share the Gospel through OBU’s J-term GO trips.

Stokes works in the Spiritual Life office, and said she felt called by God to participate in a GO trip.

“I just signed up for a random one, and then that one came through,” she said. “So I decided to go to Greece.” While in Greece, Stokes worked with refugees from the Middle East.

“We got to work with a bunch of ministries that teach them English, and provide food and clothing and just a bunch of necessities,” she said.

Her favorite part of the trip, Stokes said, was interacting with the children they worked with.

“We got to go play with some kids that live in an abandoned building, called a squat, and we took them to a park that was about a mile away,” Stokes said. “We did balloon animals with them and we blew bubbles, and we played random games; it was fun because we played games that were kind of familiar, but had a Greek spin on them.”

Stokes said she enjoyed the trip, and has already signed up for another GO trip to Utah this summer.

It is not uncommon for students to return to countries where they’ve previously served, however.

Senior Haylee Belcher, for example, participated in the trip to Brazil; this was her third time to travel to the country.

As in her previous trips, Belcher went to the Amazon, and worked with a community settled up the river. The trip lasted from late December until Jan. 20.

“We stayed with two girls who are our age, and they work for what’s basically the Baptist Association of Brazil,” Belcher said.

“They don’t actually have a church building, which I loved because it was really focused on the community,” she said. “They had services—they called them ‘street services’—because they would go to a street.”

Her team also helped with a dental clinic in the community.

“The two girls have [the clinic] once every few months, and they got to put fluoride on the kids’ teeth and teach them how to brush their teeth; they give them a new toothbrush and toothpaste and floss,” she said. “They usually do it by themselves, and so we got to be there and help them.”

Belcher said her most memorable experience on the trip was when her team spent a week with an unreached people group in the jungle, who she said “was almost totally unreached.”

She said her guides had been working with the community almost two years.

One of her team’s guides in the jungle (who she referred to as “E”) was the community shaman. While her team was there, they shared a story with him and the community every night, explaining characteristics of Jesus.

After the story Belcher said they asked E what he thought about the story.

“Don’t be afraid, because the first time I went to Brazil I was really afraid,” she said. “The biggest advice I can give is that it’s worth it, the sickness, the pain, the fears, they’re worth getting the Gospel where it’s needed.”

After graduation, Belcher said she plans to continue doing God’s work in Brazil.

“It’s honestly my favorite place in the world,” she said.