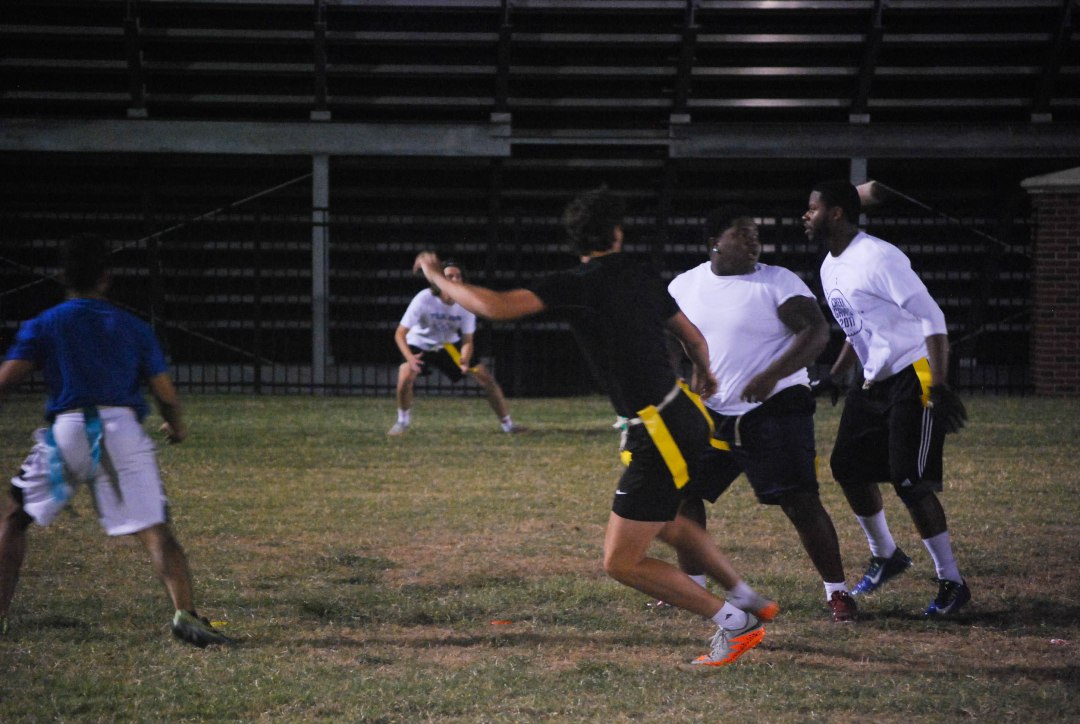 On a typical week night in the fall at Oklahoma Baptist University, you will find students on the intramural fields reliving “Friday Night Lights.” Through the years, intramural flag football has been a favorite pastime of students. David Gardner, intramural sports and recreation coordinator at OBU, explains that while flag football has historically dominated in participation numbers, other sports are quickly growing.

“For years, flag football has dominated the participation statistics, however in the last few years new trends have emerged,” Gardner said. “Volleyball, both sand and indoor have increased in numbers at a rapid rate rivaling flag football. Basketball last year set a record number and was only a few players shy of meeting the Flag Football stats.”

In his seven years at OBU Gardner has increased participation numbers in each of those years and believes that this year will be no different. This fall, Gardner is working to get more freshmen involved with intramurals by implementing all freshman flag football leagues.

“Often freshmen want to play, but haven’t been here long enough to meet enough people to form a team,” Gardner said. ” Those that are really competitive usually land on some upper classes team and the recreational student may not get involved right away.”

Gardner believes that with the help of the Residential Life staff, these new leagues will be successful.

“This year and the few upcoming years with the aid of our RA’s and dorm directors, I’d like to see a large number of hall teams or Dorm teams being coached by upper class men and filled with a freshmen only,” Gardner said. “I plan to allow freshmen to play in both leagues, the all freshmen and open league.”

Freshman Carlos Bradley says that he is ready to get out on the field.

“I’m playing to have fun and meet new people, but I’m most excited about winning because I’m a competitor like that,” he said.

However, aside from the competitiveness of intramurals, Gardner believes intramurals to be a key part of student life.

“Intramurals play a key role in the student’s development in college,” Gardner said. “Not only does it address you physical growth, it also provides an excellent opportunity for social engagement.”

This opinion is echoed by senior, Jordan Anderson.  “[Intramurals] helps create relationships with people I haven’t met before and maybe would have never met if it weren’t for intramurals,” Anderson said.

Throughout time, people have used athletics to build comradery, Anderson shares how he met his best friend because of intramurals.

“It was my freshmen year and the team I was on was terrible,” Anderson said. “We had fun which was great besides one guy. That guy played only because we needed him and he seemed to hate us for being bad. Even with his awkwardness I still tried to befriend him and talk to him after each game we had lost. It took a semester but I finally got him to open up and have a full conversation with me. We have been friends ever since.”

While competitiveness is a great for building friendships, it can also cause its fair share of malice. According to Anderson, these issues stem from people being over-competitive and forgetting what intramurals are all about.

“There are times when people including myself, are too competitive and that makes the game terrible and no fun for anyone,” Anderson said. “If people could just realize that it’s a game and you are only competing for a shirt then, I believe that intramurals would be an even better thing.”

The university currently offers 33 different intramural events throughout the year. With so many events, Gardner believes that there is an event for everybody.

“The intramural experience is for everyone, you don’t have to be a great athlete to get involved. Several events held do not involve athleticism at all,” Gardner said. “The key is to get outside your comfort zones and try something new.”

Gardner also said that even if you aren’t playing in an event, there is still a place for everyone.

“The atmosphere is always fun and sometimes just as intense as varsity games,” Gardner said. “Whether you are playing or just coming out to cheer on your peers, intramurals provide a fantastic opportunity to engage and build our Bison community.”