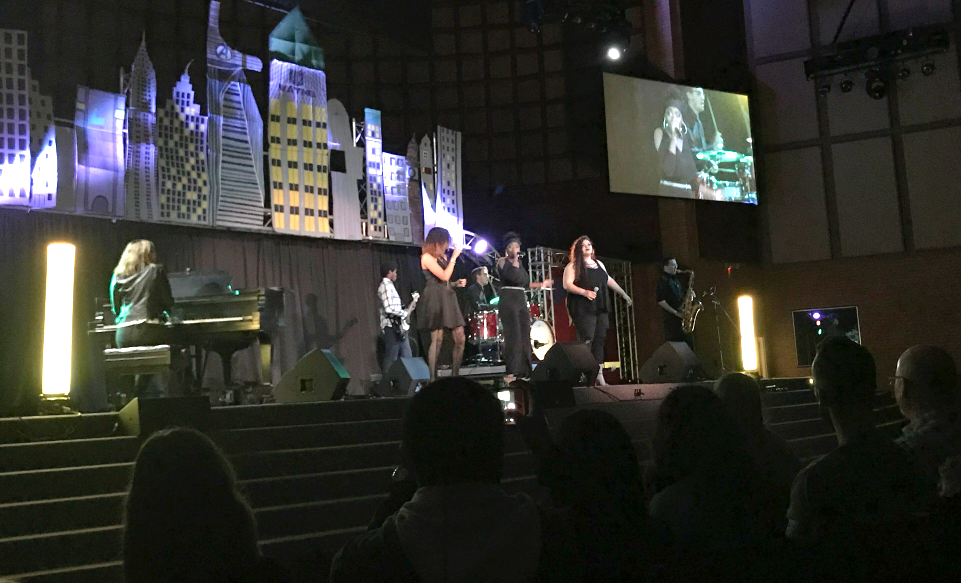 There is so much to say about OBU’s “Su-per Spring Affair”, it is hard to fi nd where to start. Everyone could fi nd something they liked between the nu-merous music acts, stage band, and emcee skits and videos. The superhero theme was shown throughout the skits and stage band set list, most prominently.

The much-beloved stage band is comprised mostly of seniors (ex-cept for Misael) this year, and this was their last show. It was heart-warming to see them pour their hearts into the music and both play beautifully and rock out.

The winners of the show, Mad Respect, changed the scene of the night. These three fabulous singers sang Respect, made famous by Aretha Franklin. They included dance steps and their harmony was spot on. From their electrifying entrance to their sassy last note, this group really stole the show.

The Co-Pilots were a great start to the show. The five-person group consisting of all seniors performed “Tear in my Heart”, by Twenty One Pilots.

Jonny vocals were in peak form and the band’s performance matched. Brady Cox, the only solo act, did a mashup of “Lean on Me” and a song by NEEDTOBREATHE.

He got the whole audience clapping along. His slightly raspy tone did the song justice. He was one to watch.

Brad and the Babes (B.A.T.B) showcased beautiful harmonies in a rendition of Queen’s “Somebody to Love”. Everyone seemed to love it.

The 3 J’s and a W gave everyone some indie/alternative feels and the performers were talented musicians.

Mostly Seniors was another amazing addition to the show as a whole. They performed “How to Love”, by PJ Morton.

Us the Dectet performed Us the Duo’s “(Stop) Just Love”. Their group looked great in their matching colors. Kawehi started the performance with a single voice and then others followed.

Brittney Poe’s wind-blown hair and Rocket from Guardians of the Galaxy impression add-ed lots of pizazz to the skits.

Jordan brought lots of energy to the stage, shining in the sky-high remake skit as the teacher.

Chapman’s acting was impressive, especially when channeling his inner Harry Potter and Dr. Doofenshmirtz. His vocal solo about a hard childhood, singing as the antagonist from Phineas and Ferb was quite funny.

Jimi Parker stole the show with his Nacho Libre impression in both a physical skit and a video skit.

He has just recently won the Blitz Week show, Mr. Bison Pag-eant, and was named Mr. Bison for the year.

He also acted like Jack Jack from the Incredibles, which was an impressive feat.

Brand new members of CAB were included in this show. Many freshmen greeted and handed out programs.

The lobby of Raley was covered in comic strip décor and photo-booth setups.

Many people are commenting on the bird that was flying in Potter Auditorium during the show. The bird swooped down near isles and allegedly pooped as well. I guess it really was a bird, not a plane OR superman.

Overall, this was a good show and the musical talent surprised people in the audience as it always does in one way or another. 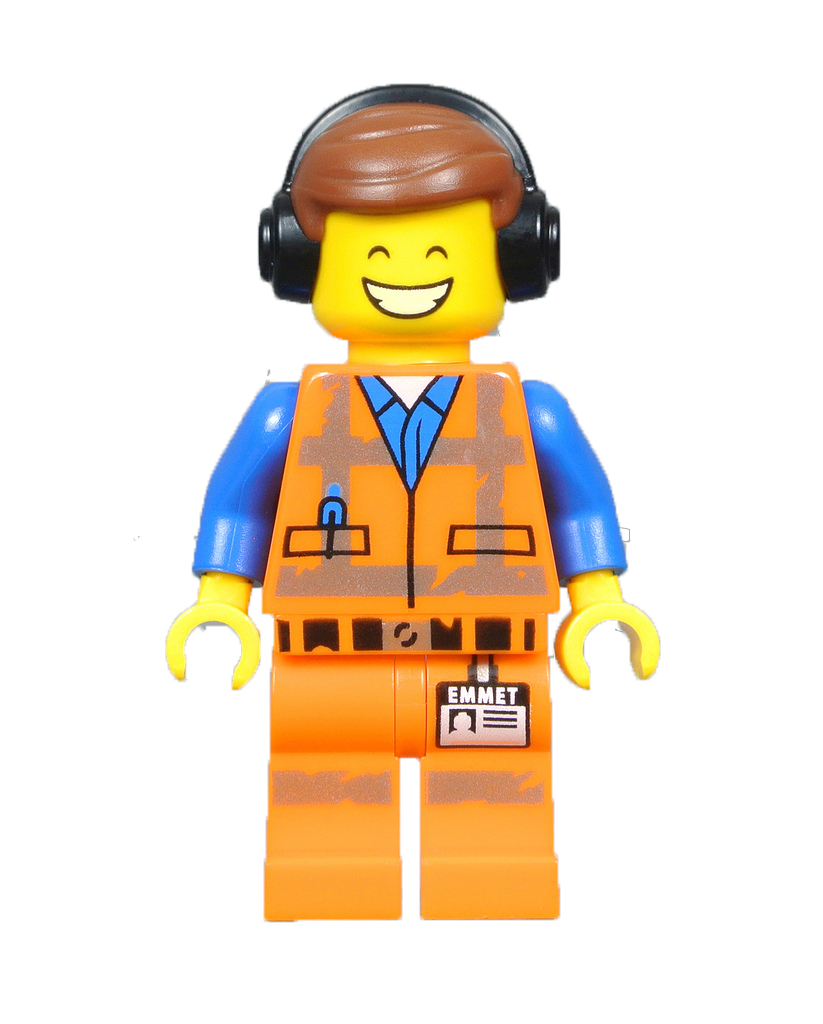 The Lego Movie 2: The Second Part follows the story of the previous film.

Weird Duplo monsters have invaded Bricksburg, transforming the world into a post-apocalyptic wasteland. Five years later, and things are not awesome.

Everyone is struggling to stay alive… except for Emmett, who is blissfully ignorant of the strife that is happening around him.

However, when his friends get kidnapped, he must toughen up and get them back, all while trying to figure out what the Duplo characters are up to.

The Lego Movie is one of the biggest surprises of the decade. What should have been a terrible, pointless commercial turned into a beautifully animated, cleverly written, and overall hysterical movie.

The Lego Batman Movie was also a lot of fun, even if it started to get tiring by the end.

The Lego Ninjago Movie is okay, but pointless and not as clever as the previous two films.

Now, we have the true direct sequel to the first film; The Lego Movie 2: The Second Part, and while it’s not as good as the first one or Lego Batman, it’s still a lot of fun, and has a large amount of humor, action, and wit that will tide the whole family over.

I will say that this film doesn’t start off all that great. The first third of the film is awkwardly paced with several meta jokes not sticking much of a landing.

There are some funny moments, including a joke about why no Marvel characters appear in these movies, but most of the humor in the beginning leg of the film falls flat.

However, as it keeps going, it gets a lot better. The writing grows sharper and wittier, the storytelling gets a lot more compelling, and the way the story handles the “twist villain” cliché is well done.

It never gets to the quality of The Lego Movie or The Lego Batman Movie, but there is a lot of great writing here, and this film, especially the second half, is highly entertaining.

There are some aspects from the first Lego Movie that carry over to this sequel. The animation is as gorgeous as ever. The colors are beautiful, the visuals are creative and fun, and the fact that it looks stop motion is very charming.

All the characters move like Lego figures would, and the moments where the film intentionally breaks the animation rules are hysterical.

The characters are still highly entertaining. Emmett is wonderfully optimistic and fun to watch, Wyldstyle is a great foil to Emmett, and Batman is hilarious.

Plus, the new additions are enjoyable. Rex Dangervest has a great connection to Emmett, and his story is fascinating to watch unfold on screen. Queen Watevra Wa’Nabi is not only fun to watch, but also wonderfully designed.

The way her entire physical form morphs with every line of dialogue is very creative. All the characters are great, and the stellar performances make them even better.

However, with all the beautiful animation and great humor in mind, my favorite aspect of this film is, surprisingly enough, the message.

Messages in movies are not why I watch movies, but I found the message for The Lego Movie 2 to be quite profound.

From what I could tell, the message is that life is not awesome all the time, but by surrounding ourselves with friends and supporters, the bad moments won’t seem so bad.

It’s a message of optimism and community that I completely agree with. It’s the kind of message that kids should learn, and adults can get something out of it as well.

The Lego Movie 2: The Second Part is a lot of fun. It has sharp humor, beautiful animation, likeable characters, and great writing.

It doesn’t reach the comedic or story heights of the first Lego Movie or Lego Batman, but I still enjoyed this sequel immensely.

Plus, it’s a lot better than The Lego Ninjago Movie. If you’re a fan of the Lego films, then I highly recommend it. Everything is awesome.

Performances continue this week through Nov. 11.

The premise of the show is complex and whimsical: four lovers Hermia and Demetrius, Lysander and Helena get themselves mixed up in some magical affairs in the course of one eventful night.

As they attempt to unravel their romantic (and later somewhat otherworldly) complexities, the audience shares the experience–in all its glory.

The success of the play can certainly be characterized by both the casts’ performances and the set construction itself.

For example, OBU Theatre’s production of the play is characterized by very impressive technical elements including the lighting and costuming.

Perhaps the most intriguing aspect of the show, aside from the character choices made by the actors, is the entirety of the experience.

It is something best appreciated in person, but for those who might not be able to make it to the show: the set is a forest made up of picturesque light and a giant set of rocks (see right).

The lighting design featured various hues of yellow, green and blue to create a magical atmosphere of the forest.

The audience’s first impression when walking into the Craig-Dorland Theatre is the sound of thematic music playing and the full view of the set.

This setting mirrors the plot of the play: simple yet nuanced, light and layered.

In the opening of the play, the audience learns what becomes the primary struggle throughout the majority of the production: Hermia is in love with Lysander, but her father wants her to marry Demetrius, which creates the opportunity for magical beings to get involved.

Two very powerful fairies are key components of the play; Oberon and Titania rule the magical forest together. In this production, Oberon and Titania are played by Arthur Schwab and Meghan Haynes. They each gave an excellent performance and created chemistry between the characters.

The duo also completed a beautiful dance number, choreographed by Amy Nevius, toward the end of the show.

With such a full and robust cast, this ideation of the comedy is multifaceted and entertaining.

The show is also filled with bittersweet moments between Hermia and Lysander, played by Bayleigh Platter and Noble Adams-Nabors.

Their performance exuded a youthful energy and power in both their speech and movement.

She was absolutely wonderful and was so obviously committed to her role; every line she delivered was filled with energy and dedication to the character.

All the actors expertly played into the relationships that unfold throughout the performance.

In the play, a group of ac-tors work together to create a new play for the wedding of the king and queen.

This acting troupe is essential to the storyline and provides excellent comedy during some of the more tense moments in the show.

The groups’ comedic timing and commitment to their odd characters made these scenes some of the standouts of the evening.

Also absolutely essential to the show is Puck, a playful sprite played by McKenzie Reece.

Reece’s physicality in this production is one of the most impressive facets of the production. She leapt and sprint-ed across the stage, making Puck an interesting and believable forest sprite.

Puck also plays a vital role in some of the mischief that ensues in the forest.

Other imp-like characters include Moss, played by Adam S. McCollough, and Vines, played by Zachary Hill.

Another impressive element of the show involved aerial performances by members of the cast, especially the dark and light fairies.

Aerial silks were suspended above the set and allowed for the creation of beautiful, almost ethereal movements.

Such an addition definitely enhanced the overall magical quality of the forest setting and created a unique interpretation of Shakespeare’s sprites.

This production of “A Midsummer Night’s Dream” runs through Nov. 11. Ticket prices for general admission, and only 5 dollars for students. For ticket information, visit okbu.edu/theatre