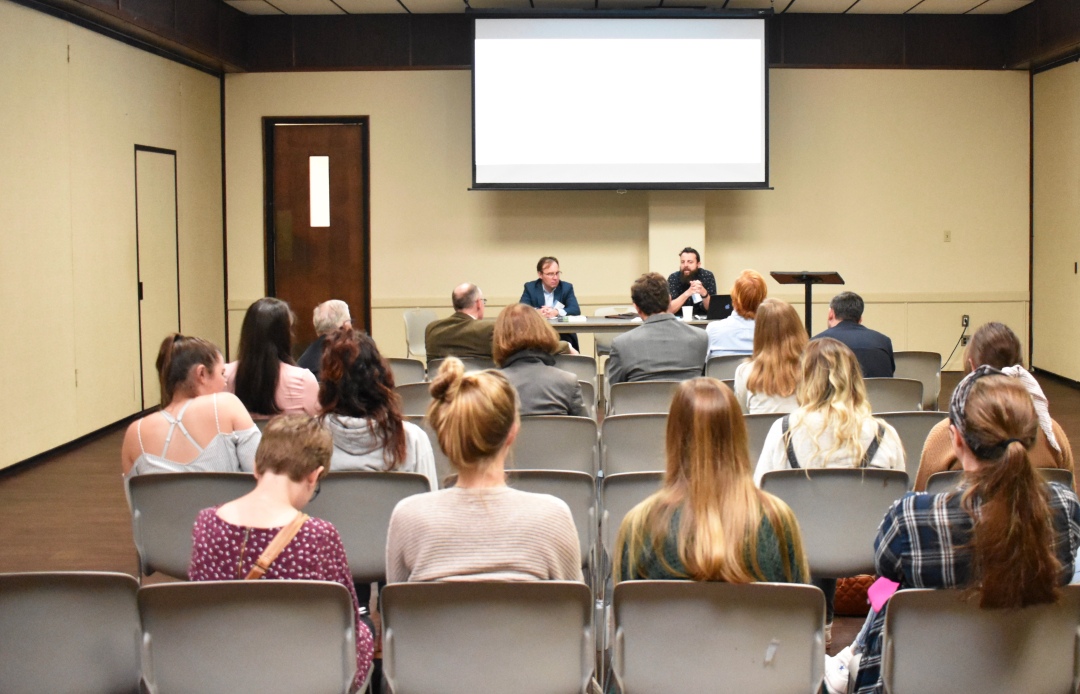 Sept. 27-29 the OBU English department welcomed students and professors from across the nation to participate in the 2018 Southwest Conference on Christianity and Literature.

American poet, Vanderbilt Centennial Professor and critic Mark Jarman was the keynote speaker for the weekend.

“This conference is an opportunity for Christian scholars to join in the intellectual activity that has typified the Christian intellectual tradition since the days of the early church and which forms the foundation of the liberal arts education provided by OBU,” OBU professor of literature Dr. Benjamin Myers said.

“It is an opportunity to truly integrate faith and learning as we seek to understand the relationship between literature and theology.”

The conference began Thursday evening with a poetry reading by Jarman, followed by a reception at the Mabee-Gerrer Museum.

More than 80 undergraduate students, graduate students and professors presented topics that explored the ways in which faith and literature come together. OBU students were welcome to attend for free.

“I think the conference was a great experience,” Nettleton said. “OBU really represented itself well — the panels were informative, more engaging than you would think, and they were on a wide range of topics. “Having a chance to share my own work was very rewarding as well.”

Panels included topics such as C.S. Lewis and the Age of Disenchantment, Faith and Identity in Contemporary Literature, creative writing pan-els and undergraduate panels.

Other participants included professors and students from Duke University, John Brown University and others from across the nation.

“Academic conferences are one of the primary ways that scholars share ideas and try out concepts they may develop further or even try to publish in a book or journal article,” OBU associate professor of English Dr. Brent Newsom said.

Each session included two or three presenters, who read the entirety of an academic paper.

After the three presentations, the panel opened for questions from those in attendance.

This format is generally universal for literature conferences because it allows for an exchange of ideas, which is what makes conferences like this important to the academic community.

“Such events acknowledge the importance of Christian traditions, texts and ideas in a variety of disciplinary contexts,” Newsom said.

“I hope [that they] show our colleagues within the discipline that thoughtful, important scholarship is being conducted from Christian perspectives, even if Christian voices may be the minority in those disciplines.”

Besides exchanging ideas, the conference opened the door for expanding community in the realm of literature academics.

Newsom said he was excited to renew old connections and for new ones.

“The fruits of an academic conference often come months or years later as a result of these connections and exchanges of ideas,” Newsom said. “For students, faculty and other members of the OBU community, I am excited [that they were able] see first-hand how humanities disciplines like literature explore questions and problems of broad significance, and I hope they [were] enlivened by it.”

OBU has the opportunity to host the Southwest Conference on Christianity and Literature about once every 10 years.

The English Department has several other events this semester, including Half Past 3 every third Thursday at 3:30 p.m in the Upper G.C.