Take a look through “The Bison” archives

OBU defeated the Kingfisher college by six.
Throughout the game, the Baptists made short gains. At the end of the first quarter the score was 0-0.
The Baptist got a three-point lead from a kick from Glenn Randel. Baptists were ahead 3-0 at half.
A second time Glenn Randel kicked the ball and scored for a 6-0 lead over the Kingfisher College, winning the game.
Not only did Randel will the game for the team, but he also acquired a new nickname of “Punny” for his punting abilities.

The OBU track team was just beginning its season, and The Bison was hopeful that the team would exceed their record of the previous year by winning State honors.
The team was preparing for the first meet with Oklahoma A&M (now Oklahoma State University) in Stillwater.
“Earl Cole, captain of the track team, is endeavoring to set a new state record for the discus throw,” the article said.
Others mentioned were Coach Victor C. Hurt, Eddie Hurt, Jerry Hold and Bill Tipton.

Usually known as a big date for tricks, this was a big day for freshman on campus because they were the sole publishers of the Bison.
“This will be the first time that the Freshman have ever attempted upon themselves and the upperclassman are expecting the worst. But “they may be surprised,” the article said.
This was a decision made in a class meeting. This edition of The Bison was known as the freshman edition.
John Oliver was selected as editor. Mark Feather was elected as the office of business manager, and Ray Reeves was appointed assistant editor.

“Ge whiz! Is this O.B.U.?”
“It doesn’t look very much like the place where I went to college!”
According to this article published in November 1936, these exclamations were voiced by several hundred returning alumni members of OBU.
In that year, more than $10,000 were used for campus improvements.
What were the improvements? A rock wall, gardens, building remodels and an oval-shaped cement driveway, now known as The Oval.

Patty Berg and Helen Dettweiler were internationally known women’s golf champions
They were scheduled to play three-time state champion, Pat Grant at the Elks country club on November 21, 1941.
Berg gave a lecture before the physical education classes and was also the speaker at chapel that Friday morning. Berg and Dettweiler attended the University assembly exercises.
The four ladies who played against each other were Mrs. Kate

“OBU has organized one of six badminton clubs in Oklahoma,” the 1946 article said.
The first badminton tournament was going to be held on December 1, 1946 at the Continental Oil Company gymnasium in Ponca City.
The article encouraged anyone interested to join the Shawnee badminton club.

November 9, 1951
“Other Universities Have Chapel, Too”

“So you don’t like compulsory chapel attendance and you don’t like the penalties for non-attendance,” the article said.
In 1951, Chapel attendance was required for all students at OBU. A negative hour was given to all who were given five unexcused absences.
Miss Lena Smock headed a committee put together by Dean L. E. Solomon in 1948. Smock and others on the committee put together a survey and sent it to 33 denominational colleges seeking whether or not they required chapel attendance or not.
All 33 required chapel attendance and penalized for excessive absences.
The article ended with saying that if someone considered OBU’s punishment for missing chapel, they should look at the other university’s consequences.

OBU journalism students conducted several surveys to determine the winner of the 1951 election between Dwight D. Eisenhower and Adlai Stevenson.
Eisenhower won 141-110 in one unnamed staff reporter’s opinion poll.
In his poll, only five people were undecided voters.
“The reporter discovered that it wasn’t uncommon to find students voting for a man because of the slogan he used,” the article said. “Students also closely adhered to the party of their parents.

The Four Freshmen, an America male vocal band, made an appearance in Shawnee’s Municipal Auditorium on November 13, 1961. They were founded in the barbershop tradition.
It was considered a great experience for OBU and Shawnee to experience and enjoy professional entertainment.
In 1961, the “Freshmen’s” had won every popularity poll and were later determined America’s top vocal group. For four years prior, they were ranked at the top of surveys conducted by Metronome Down Beat Billboard and the United Press.

Dr. Grady Cothen was inaugurated as OBU’s 10th president November 5, 1966.
In his speech, Dr. Cothen called for a better knowledge of the true values of life.
“The OBU graduate must be as completely equipped as possible,” Dr. Cothen said.
Dr. Cothen was OBU’s president from 1966-1970.
November 10, 1971
House Speaker Albert to Begin Kerr Series
Past Speaker of the U.S. House of Representatives, Carl Albert addressed the first Kerr Lecture at OBU during an assembly help on November 12, 1971 in Potter Auditorium.
Dr. William G. Tanner, the president of OBU in 1971 presided the assembly. During the assembly Albert was inducted into Omicron Delta Kappa, which was a senior men’s fraternity at OBU.
The assembly was one of several political science projects funded by the Kerr foundation.

“Reunion” was the theme for the 1981 OBU Homecoming.
Chris Christian, a contemporary Christian artist, was in concert in Potter Auditorium. The free concert was presented by the University Concert Series.
Many clubs on campus help reunions for those who participated in them while class reunions happened also.
The Lady Bison had a double header playing the College of the Ozarks first then playing Ottawa University.
Continuing with OBU’s Homecoming tradition, Harvest Court members were announced along with the Musical Showcase, which featured alumni with the Bisonette Glee Club singing with alumni Bisonettes.

The Student Government Association were receiving complaints about the phone system on campus.
Earl Wilder, a chairperson for an SGA committee designed specifically for student complaints said that the administration had been very helpful in suggesting operations for researching a new phone system.
“About half the complaints are due to a misunderstanding of how the system works,” Wilder said in the article.
“The other half of the complaints are legitimate complaints about system shortcoming.”
The administration had planned on having the new system installed by the next fall semester.”

“If passed, the bill would radically change financial aid in colleges nationwide,” the article said.
The bill would eliminate banks from the student loan program. The government would become the banker and would raise money for the loans. It wouldn’t take effect until the 1994-95 school year. If passed it would eliminate Stafford and Perkins loans.
Kay Vincent was the director of financial aid at OBU in 1991.
“Some of the statistics I’ve read estimated that it would actually cost the taxpayers $600 million more a year to administer the Direct Loan Program,” Vincent said.
It would also double the Pell Grant from $2,400 to $4,500. The Pell grant was supposed to increase every year, but often times the money was not there for it to increase. 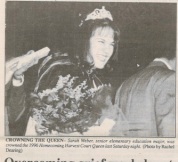 Sarah Weber, an elementary education major and Jason Porter, a sports medicine major were crowned as the 1996 Harvest Queen and King.
“It was just such an honor to be up there with Staci Tignor and Tina Sims, because they are such incredible women of God,” Weber told Biswell. “It just makes think how much the Lord has blessed me.”

This was OBU’s 81st homecoming.
One of the events that was offered was a golf tournament. The cost of the golf tournament was $45 per person.
“Immediately following the homecoming Chapel, alumni, guests and students are invited to attend the dedication of the new art building,” the article said.
Alumni and others were invited for the basketball game later on that Homecoming Saturday for a double header against National Christian University.
Members of the 1956-67 basketball teams gathered to celebrate the anniversary of OBU’s 1966 NAIA National Championship.