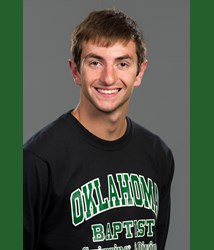 When most people think of athletes, they think of the physical demands. However, there is more to the equation.

Freshman health and human performance major Jordan Atkins is an example of the benefits that can be gained from being an athlete. Atkins is on the swim and dive team and has a drive to succeed in his sport as well as in his college career.

“From the time I first met him when he was seven, I knew Jordan was going to be successful in whatever he did. He is just one of those kids. It has been a true blessing to watch Jordan grow both in and out of the water,” Riptide Aquatics coach Eric Huntsman said.

Atkins started swimming competitively at the age of 13 and soon after found a love for lifeguarding. Lifeguarding is what helped Atkins find his love for medicine. After having to personally see injuries regularly in the pool and having to care for the injured himself, he realized the medical field is where he wanted to be.

He said the main event that led him to the medical field was when he had to backboard someone while working a shift. He said he had the ability to keep the person calm amongst the chaos and that is when he knew it was what he was supposed to do with his life.

“That’s when I figured out I have an ability to relate to people and know how to handle a situation medically and under pressure,” Atkins said. “That’s when I went, ‘wow I need to use that talent that God has given me.’”

Another reason he is interested in the medical field are his own physical afflictions.

At a young age, he had ear infections constantly and one got so bad that it caused his eardrum to rupture. This occurrence led to multiple surgeries, including skin grafts, tubes and an eardrum replacement.

“If any of those surgeries hadn’t have worked, I wouldn’t have been able to swim ever again. So, I’m thankful I’m still able to do that and that it has guided me to the medical field,” Atkins said.

Atkins said that after much research on different areas of the medical field, he has decided that he would like to pursue a career as an anesthesiologist. He said the main reason for this choice is that he found that anesthesiologists have the most ability and flexibility to interact with their patients.

“I want to get to know who I’m working with, because by getting to know them they are more willing to trust me. They are more open to my suggestions, and maybe if they’re not Christian they may be more open to a discussion about it,” Atkins said.

Atkins said his main goal for the future and his profession is to have the ability to make people feel comfortable and to let them know he will do whatever it takes to make sure the best outcome is possible. He wants to let his patients know that it isn’t always going to be his knowledge or understanding that leads to those decisions, but that God always will play a part.

Atkins said a past swim coach has played a big role in that thought process for him, because at every practice he came to he always made it a point to let Atkins and his teammates know that it was his job to help the swimmers get better while bettering himself every day.

“That’s something as an athlete and as a student I relate to because I always want the best for myself and I don’t want to live with mediocrity. I want more out of life than just simplicity,” he said.

This philosophy is one of many lessons that Atkins has learned during his time as an athlete, and he said he is very grateful for it. Being an athlete and being a part of a team has taught him not only how to understand others on a more personal level, but also on how to constantly work on improving himself in whatever he is doing.

“As he furthers his knowledge in the medical field, I know he’ll be able to draw from hard swims, early swims and long practices as he deals with the challenges of the medical profession, and I know he will lean on understanding from the best physician our Lord Jesus Christ,” Atkins’ father Robert said.