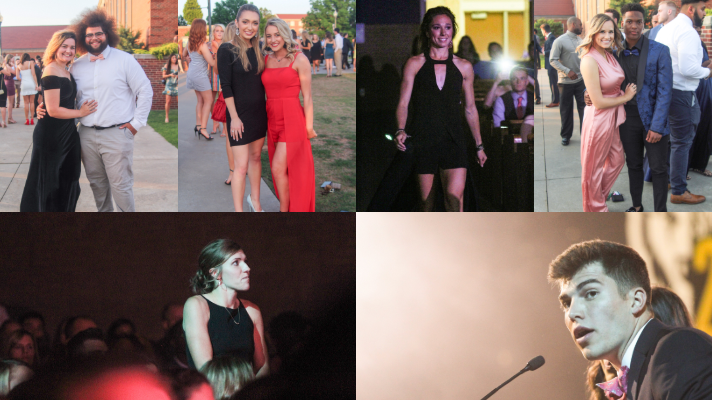 All Photos by Jacob Factor/News Editor

Made a Difference Award
Women’s Soccer

The Oklahoma Baptist University Cheer and Stunt team is one of the few different teams on campus that is fairly new to the school.

Although cheerleading has been a part of OBU for quite a while, the competitive team didn’t come onto the scene until 2015.

This was a huge transition for the program, with it going from a group of girls performing on game days for certain teams, to competing in things like the Daytona National Championships and STUNT Nationals.

Kailey Moore, a senior from Choctaw, Okla., is one of the first seniors to be here all four years and see the entirety of the program’s transition.

“It was really emotional for me to see where we started my freshman year, and coming in sophomore year, learning the ropes of things. And to be where we are now, it’s so awesome to watch the transition and where the future is headed for OBU Cheer,” Moore said.

This changeover in the program is home to one event that the girls on the team take pride in: Daytona. This trip is home to thousands of cheerleaders across the country coming together to compete in the championship for the National Cheerleaders Association.

“The atmosphere is… Well, you can’t explain it. A lot of hard work goes into that small amount of time, and you only get one chance,” senior Bailey Davis said.

Davis, also from Choctaw, Okla., spoke about how it was for her, taking her last trip to Daytona and the famous Bandshell where they perform. She said that it wasn’t sad because the atmosphere is so exciting, but she tried to impart on the team to take things, “moment by moment.”

The team was able to take two separate teams to Daytona this year, one intermediate and one advanced team.

The intermediate squad, in their first year going to Daytona, took a second-place finish in their performance, hitting a perfect routine on day two.

The advanced team broke the top three, which is something that they haven’t done in the last two years that the program has taken the trip.

The team saw an increase in the number of girls that were able to cheer this year, with the team rounding out at almost 50 girls.

She said she feels that, as a senior, it is important to make a conscious effort to create relationships with the girls, because she said that relationships are probably the number one priority in cheer.

Although the program is new, they have done their best to start traditions and do things that were specific to this team, and this program.

“We have a lot of things that bring us together when we need it. [Previous traditions] have stayed with the cheer team for a long time, and when we started competitive, we transferred that over,” Moore said.

Now that the Daytona National Championships are over, the team looks ahead to the STUNT games part of their season.

This consists of four quarters of play where teams go head-to-head, performing a routine.

Whichever team executes their routine the best according to the judges will get the point.

Jessica Stiles is the head coach for the OBU cheer and stunt team and saw quite a bit of success in her years as a cheerleader.

Stiles attended the University of Central Oklahoma from 2005-2009, where she was a captain of a national championship cheerleading team.

In 2017, Stiles was named the USA Cheer STUNT Division II National Coach of the Year.

In the 2017 season, Stiles and the STUNT squad posted an impressive 5-3 record.

The team looks to take STUNT Nationals by storm this year, with their third-place bid. Stunt Nationals will be held in Michigan, April 27 to April 29.