The Oklahoma Baptist Lady Bison claimed the No. 3 side in the upcoming GAC Championship after a week that saw OBU split conference matches, including a non-conference match against Midwestern St.

Kim Moosbacher started the week the way she came into the week: dominating.

Moosbacher is playing at an unprecedented level as she only dropped eight games total in all three matches this week, earning her the GAC Player of the Week.

Since the April 2 match against Cameron University, which was Moosbacher’s last loss, Moosbacher has surrendered 19 games through seven matches, with her opponents averaging just under three games a match against her.

To put that in perspective, in two match wins, Moosbacher picks up 24 games.

The rest of the team against Henderson St. followed in Moosbacher fashion as OBU won 6-1.

Every Lady Bison who did win won in straight sets. OBU captured all the doubles matches as well.

Doubles did not go as planned the next day against Midwestern St. The Lady Bison fell 6-1 in each doubles match.

Madeleine Boepple nearly stole the win from MSU as she was just edged out in her second set 7-5 in the tie-breaker.

The Lady Bison saw another heartbreaking loss as they fell 4-3 for the second straight game.

Kim Moosbacher and Ethne Dowling got a doubles win for OBU at No. 1 6-3.

The duo of Moosbacher/Dowling went 8-8 on the season.

Despite falling in their respective match against ATU, seniors Alex Bowers and Madeleine Boepple went 7-7 as partners.

In similar fashion to the Midwestern St. match, Moosbacher and Bowers, with the addition of Tahlia Walsh this time around, did their part to get OBU the win as they won their matches, but three wins was all OBU could muster.

Both Bowers and Walsh saw double-digit third set scores as both Lady Bison won in the last frame 10-8 and 12-10, respectively.

Oklahoma Baptist finished its season winning five of their final seven matches for a 4-2 conference record and an 8-13 overall record.

The GAC Championship in Bentonville, Arkansas against is up next with Oklahoma Baptist facing Henderson St., who OBU just defeated 6-1, Thursday, April 25.

If Oklahoma Baptist is able to get past Henderson St., the Bison will take on the No. 2 seed Bisons of Harding Friday, April 26 at 2:00 p.m. 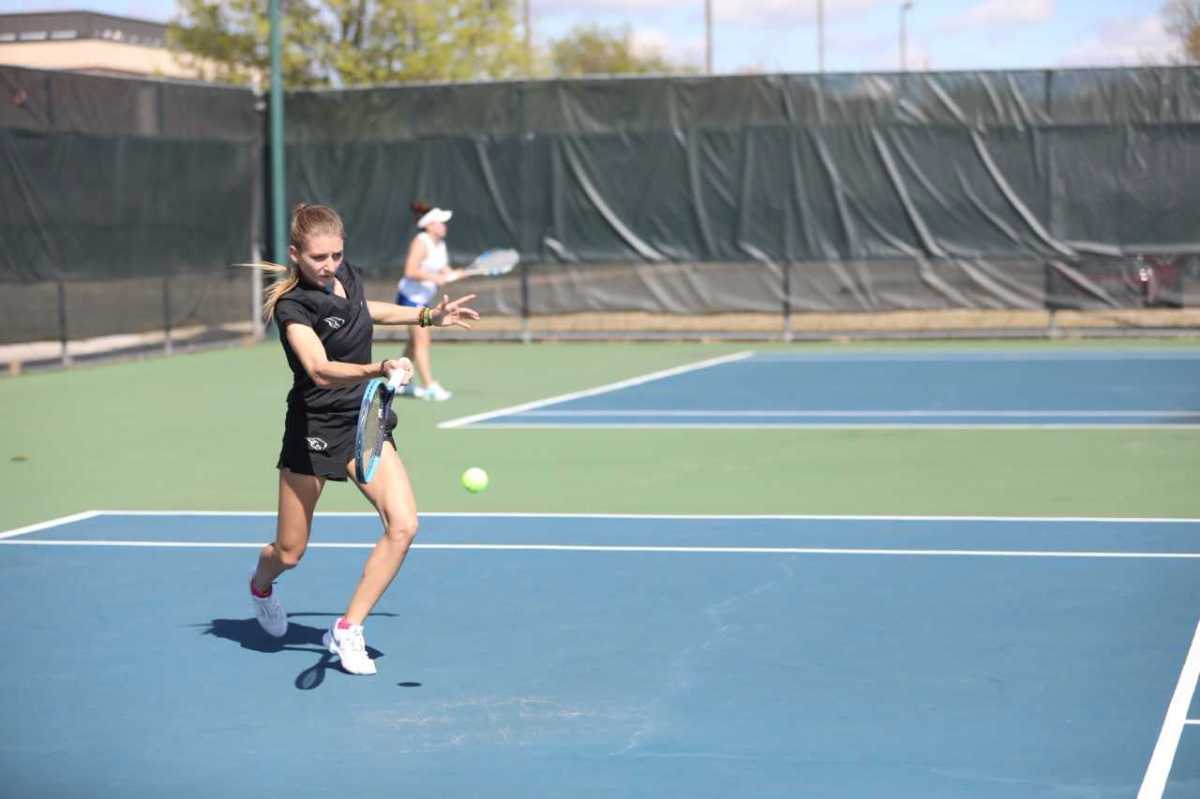 National and conference recognitions pile up for the Oklahoma Baptist Lady Bison in a strong week of tennis.

GAC competition has been friendly towards OBU.

After losing seven in a row, OBU has rattled off four consecutive wins as of Sunday, April 14.

This included three conference match victories in a row.

With the potential to make it four in a row, they face GAC-foe Henderson St. Monday, April 15 right here on Bison Hill.

Through the course of their winning streak, the Lady Bison have posted two shutouts while squeaking out their other two matches 4-3.

Alex Bowers went 4-0 in singles over the week, earning her GAC Player of the Week honors.

With her 15-2 singles record at No. 1, Moosbacher was ranked No. 9 in the ITA Division II Women’s National Singles Rankings.

Only four of her 15 wins have gone three sets.

Moosbacher has been dominating on the court and she will hope to continue her efforts for the big dance in a week.

The Oklahoma Baptist Women are now 7-11 on the season.

Three of those seven wins are against GAC opponents as OBU holds a 3-1 conference record.

With the Arkansas Tech match initially meant for Saturday, April 13 being postponed, that match will spell the conference finale for OBU.

With the GAC match against Henderson St. Monday, April 15 and then one more conference match to follow, the Lady Bison are looking to go 5-1 over GAC competition.

With the GAC Championship just over a week away, the Lady Bison have their eyes set on hardware in Bentonville.

With the season in full swing, the Oklahoma Baptist Tennis team will be around Bison Hill a lot for the coming days.

OBU’s Tennis teams will see seven matches this month; four at home for the Lady Bison and five for the men.

As well as the GAC Championships to complete their season.

Spring Break, the midway season of the semester, is here and gone. April, the longest month of the school year, is upon us. Everything seems to happen in April.

With the first half of the season done, which included three Division I opponents in Air Force, Abilene Christian and Southern Methodist, the Bison Men are 5-5 and the Lady Bison are 3-10.

As a mid-season review, we sat down with Coach Proctor to discuss his Oklahoma Baptist squad.

Coach Proctor’s takeaways from the season so far and looking ahead to conference play were the topics of discussion.

Proctor talked about the thick and the thin going through the season. He feels a different vision going into conference play.

“I think both teams are on a good track right now,” Proctor said. “Each side we have had some good matches and some bad matches… some matches that were winnable that we lost. We have also had a couple matches that we won that we very well could have lost. We played a very tough non-conference schedule.”

The mindset is to be positive and the wins will follow in the long run.

“My take is that we are in a good position and we are right where we need to be to go into conference play fresh and feeling confident,” he said.

Proctor said he believes that his boys and girls can go into every match and succeed if they have the right mindset.

The players also have to accept what position they will be in by the end of the season.

“We can peak that high or we can dip that low,” Proctor said. “I have excepted that reality and I think our players understand that reality too. What we need to do is be very, very focused on ourselves.”

If the players feel confident playing their game, Proctor can vision them being winners.

“We know our level and we know if we play [at our] level we are going to do just fine and we will be very successful in conference,” he said. “All in all, what do we need to do play well in conference? Keep doing what we are doing.”

Leading the way for each Bison squad is Kevin Andrusch and Matias Le-Fort, who are each 7-3 in singles on the season.

For the Lady Bison, Kim Moosbacher has been a huge bright spot in a rather poor season thus far for the women as she is 11-1 at No. 1 singles.

Their next action will be at home against conference opponent Ouachita Baptist Friday, April 5 at 3:00 p.m. Followed by a 10:00 a.m. match time against another GAC-foe, Henderson State, Saturday, April 6.

The rematch was set, and the Bison and Lady Bison were on the road.

The Lady Bison headed out to Tahlequah to take on the Northeastern State Lady Riverhawks Friday, Feb. 22 and the Bison headed South to Dallas, Texas for an exhibition match against Division I Southern Methodist.

Last year the Lady Bison met the Lady Riverhawks in the Finals of the NCAA Championships Central Region.

OBU was unable to pick up a single doubles match, giving NSU the early 1-0 lead heading into singles.

Kim Moosbacher got her revenge against Lady Riverhawk Tatjana Stoll from the doubles match with a three set 6-4, 4-6, 7-5 win at No. 1.

Tahlia Walsh and Madeleine Boepple both got singles victories.

With needing just one more victory to seal the match, Alex Bowers tried to give OBU the win after dropping her first set 6-0 as she pushed the match to a third set before falling 7-5.

Due to time constraints, the matches at Nos. five and six were changed to an eight game pro set, of which the Lady Bison lost both. NSU got the slight edge 4-3.

After the Bison Men returned from Dallas, Oklahoma Baptist made their way to Sooner country in Norman, Okla. against the Kansas Wesleyan Coyotes.

Due to weather concerns, this match was relocated from Bison Hill.

This was the first time these two teams had met.

On the women’s side of things, the Lady Coyotes are 0-2, having only logged one point in those two matches.

This, too, was their first match of 2019. Both men’s and women’s squads got the win over the Kansas Wesleyan Coyotes 5-2 and 7-0, respectively.

Both Bison teams won doubles, including a narrow 7-6 doubles victory from Andres Graterol and Matias Le-Fort to give the men the nod.

The women won each of their doubles matches 6-1 as KWU had to forfeit the third doubles match. Both squads were dominant in singles.

The men’s singles victories all came in straight sets and with the exception of Gianlucca Galdi’s 7-5 second set win, every set was 6-2 or better on the side of the Bison.

The ladies showed utter domination as they only gave up two games in all of the four singles matches with Alex Bowers and Madeleine Boepple having 6-0, 6-0 wins.

Prior to their Feb. 26 match against University of Arkansas Fort Smith, Bison duo Andrusch/Galdi are now 4-0 as doubles partners at the No. 1 slot in regular season matches. Graterol/Le-Fort are 3-1 at No. 2. Lady Bison Moosbacher is 5-1 in No. 1 singles. Boepple is 3-0 in the No. 4 slot and has seen two 6-0, 6-0 victories. It seems Coach Proctor may have found something. Up next for the Oklahoma Baptist Men is their home opener.

The 5-2 Texas A&M-Texarkana Eagles will come to Bison Hill March 1, followed by Western New Mexico on March 2, also at home. The next three Bison tennis matches will be in front of their home crowd.

The Bison Women have a back-to-back in San Angelo, Texas against St. Edward’s and Angelo St. March 1 and 2. Last year, the Lady Bison defeated St. Edward’s at home 8-1.