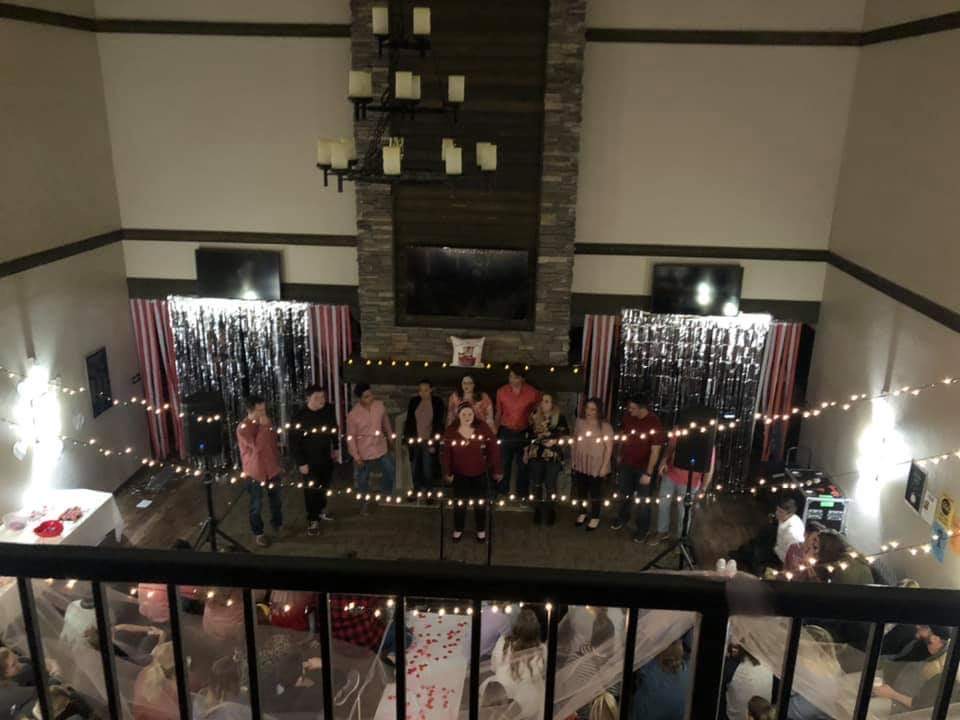 The Lodge was dec- orated in pink and red and set the tone for an evening focused on all things love and romance. Lights hung from the ceiling and added to the atmosphere.

The first skit of the night was focused on the current season of “The Bachelor.” It was a fun start to the night and gave the audience insight into what they would be seeing at the event. The hosts of the show were Cameron Denno and Tyler Koonce.

After the opening skit, True Voice, OBU’s a cappella group, per- formed an arrangement of “I Need Your Love” that thrilled the crowd. The song was one of the standout performances of the night. True Voice is under the direction of dean of the Warren M. Angell college of fine arts Dr. Christopher Mathews.

After their performance, Makalah Jessup performed spoken word about Valentine’s Day that featured countless jokes about roman- tic comedies and was extremely relevant to students on Bison Hill.

This moment was one of camaraderie among the crowd, and it united audience members through discussion of shared experiences and humorous OBU stereotypes.

Next, couples from the crowd were selected to play a game to see who knows the other the best. Couples turned back-to-back and were asked a series of questions about their relationships.

Then, they indicated who better fit a description by raising either their own shoe, or their partner’s shoe. This game was very interesting and personal, and overall fit the fun and quirky atmosphere of the evening very well.

After this, more students were showcased in musical performances.

The first of these was a rendition of “Hey There Delilah” on the ukulele performed by Parker and Raelie. This song is a crowd favorite and perfectly fit the theme of the evening.

Following that song was another crowd favorite, “When You Look Me in the Eyes” by the Jonas Brothers, performed by a group called “Just Friends.”

Nearly every girl in the room was singing along to this song from our childhoods. The performance was a good one; the harmonies added something to the song that made it different from the original while maintaining the heart of the song itself.

The last students to perform for the night were Cason West and Andrew Roberts. They played “10,000 Hours” by Dan + Shay and Jus- tin Bieber. Their guitar playing and singing voices made this a good lead up to the final act of the night.

Dr. Kevin Hall, professor of biblical and theological studies, and Dr. Randy Ridenour, professor of philosophy, took the stage for the last songs of the night. They performed two different songs.

For the first song, Ridenour took the lead and performed a heart- warming song that made the crowd react with laughter and watery eyes. Hall played the last song of the night and the crowd was thrilled by the end of their performances.

The crowd’s response to Hall and Ridenour was by far the most entertaining act of the night.

There were other skits between acts throughout the night, which were all very funny and relevant to the season and OBU.

Overall, Lodge of Love provides a good night of entertainment on campus and welcomes in the spirit of love.