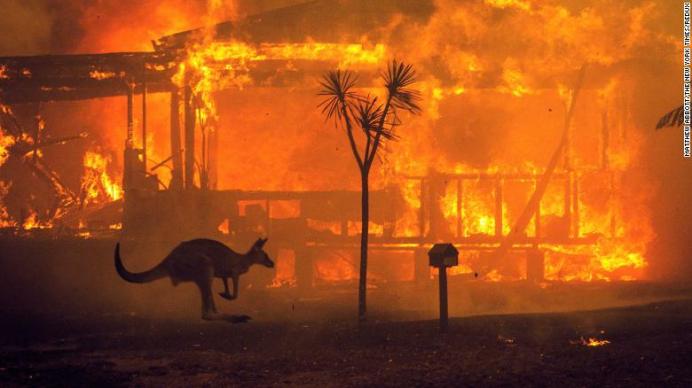 A kangaroo, one of Australia’s unique species, traveling in front of a flaming building in Australia.

The Australian fires that started in September of 2019 have now burned more than 15 million acres and show no signs of stopping as Australia is only a few months into the summer season.

The blaze has done more than just destroy property and nature. It has deeply affected the function- ing of human society in over half of Australia’s population.

Since the beginning of the fires, at least 28 people have died across the nation. The flames have burned a land mass equivalent to the size of West Virginia.

The areas that are being hurt the worst are New South Wales and Victoria. These are populated states on the south-east side of Australia, where the city Sydney is located.

Across Australia, over 3,000 homes have been destroyed and many more have been damaged.

With people’s home being damaged, many have been forced to evacuate – therefore effecting their daily life.

A survey from The Guardian revealed that 9 percent of people have been forced to miss work. The Australia Institute estimates over 1.8 million workdays were lost – costing an estimate of more than 1.3 billion dollars in lost economic production.

Even with the serious economic issues, the health of Australian citizens is also an important issue at hand.

Air quality in parts of Australia have been tested and reported to be 11 times the “hazardous” level. The poor air quality, due to large amounts of smoke, has made many people sick.

Extremely tiny smoke particles can be carried in the air that, when inhaled, can worsen asthma or lead to possible heart attacks and strokes.

This has caused many to go to the hospital with minor and serious illnesses and even the loss of life for some.

The sheer number of wildlife lost to the flames makes this already aching country hurt even worse. At the beginning of 2020 many were estimating about half a billion animals were killed by the fires and many more were displaced.

HuffPost interviewed Chris Dickman of the University of Sydney about the wildlife statistics surrounding the fires. “The original figure—the 480 million—was based on mammals, birds and reptiles for which we do have densities, and that figure now is a little bit out of date,”Dickman said.

“It’s over 800 million given the extent of the fires now—in New South Wales alone.”

According to Dickman, this number soars above a billion when you include animals, bats, frogs and other invertebrates.

“Over a billion would be a very conservative figure,” Dickman said.

Sadly, no one will know the full extent of dam- age until all of the fires are extinguished.

Sam Mitchell, a co-owner of Kangaroo Island Wildlife Park said in an interview with The Guardian, that he estimated the total koala population to be around 50,000. He estimates that over half of the koalas have been killed.

Professor Bradshaw at Flinders University gave some hope for the tragic news of the wildlife. “Animals can and do rebound from such devastation… We are constantly surprised how recovery happens quickly after a fire and how many animals survive,” he said.

To put the damage into perspective, the 2018 California wildfires burned almost 2 million acres and were estimated to have cost close to 3.5 billion U.S. Dollars. So far, the flames in Australia have burned more than 15 million acres, which is over seven times the land mass of the California fires.