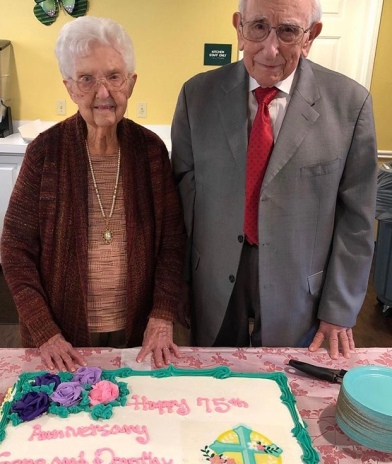 One of the biggest concerns that can come with moving away from home to attend college is:

“What if something bad happens and I’m not there?”

As someone who has just recently experienced this very situation through the death of a family member, I hope I can provide some in- sight as to what it’s like and how to deal with it.

Wednesday, Oct. 30 at 10:30 p.m. Dorothy Marie Hulsey, my family’s beloved matriarch, left the side of Gene Hulsey, her husband of 75 years, to meet the Lord.

My great-grandma “Dot” was a spunky, God-fearing woman that every member of our family admired dearly. She was quick-witted even at the age of 93, stubborn as a mule and a devoted prayer warrior.

About a month prior to her passing, she had fallen in the night and fractured a vertebrae in her spine. So after about a week in the hospital and three weeks in a skilled nursing facility, she decided she was ready to see her grandson-in-law and meet her God.

Though we knew the time was coming and that she was ready to go, the blow of loss wasn’t any less painful.

I didn’t cry. Of course, I felt sad, but I was also relieved to hear she was no longer in pain and that my great-grandpa had prayed her through it.

What I didn’t feel in that moment, though, was the feeling of isolation that can come with experiencing loss away from home.

So I texted my boyfriend a quick “Hey, this happened,” text and I went about my day. But as I did, I felt more and more weight building on my chest.

The first day of summer after my junior year of high school, I lost my dad to sud- den cardiac arrest while he was on a run around Lake Overholser with my mom.

It would be an understatement to say it turned my world upside down.

Prior to that day, I had been planning on going to college in Colorado much to the dismay of my dad. He had relentlessly tried to bribe and guilt me into going to a school in Oklahoma, but in my ignorance, I had blindly refused and brushed it off.

Obviously, after that event, my plans drastically changed and here I am attending OBU – a school just an hour away from home. But after such a loss, I had a major fear of being even an hour away from my family in the event of a tragedy.

So of course, as my day went on, the effects of that fear began to push on me more and more.

Let’s just say, I didn’t deal with it in a healthy way at all. If you want to dig your- self a hole of negativity, a great way is to not talk about it. So, naturally, that’s what I did. Besides sending that one brief, unemotional message to my boyfriend, I spoke to nobody about it. I didn’t say I was feeling sad, I didn’t call a family member, I didn’t tell my friends and I avoided the whole subject altogether.

Step two of my naturally unhealthy coping techniques was to isolate myself. Aside from going to class and The Bison office to do my work, I didn’t socialize with any friends and in my downtime I went to my room (sidenote: my roommate was gone on a trip at the time) to be by myself.

o after a day full of un- healthy coping habits, stressful conversations about money, tests, lectures about the future, deadlines and home- work, I broke down.

By the grace of God, my mom called.

The first thing I needed to do was to be with the people that love me. So in the spirit of Halloween, I got dressed up in a goth girl fashion and met my friends to go to the basketball game and the BOO-gie Ball.

Upon seeing me, the first thing that my friend Jessie did was give me a hug. My boyfriend had told her what had happened. This did more for me than words could’ve ever done.

That singular gesture al- lowed me to go about my night without negative thoughts or tears or need for isolation. My friends didn’t force me to talk about it, but I know they would’ve listened if I had wanted to. They were there for me and that was enough to help.

The next thing I needed to do was to accept help and go home.

In college, it’s difficult to be able to just pick up and leave when something bad happens, but sometimes it’s okay to do exactly that. So despite plans to stay at school on Friday night to finish papers and study, I decided I needed to have my mom pick me up. I needed to be around people who were go- ing through the same thing I was and share the grief.

So I went home that night. There, I was able to do all I needed to do as well as be with my family. The next day, I was able to wake up feeling strong and get ready for the funeral with my mom and sisters.

The last thing I needed to do was remember that being vulnerable isn’t being weak.

So here I am – writing something that absolutely terrifies me.

But I need to do it not only for my own health, but be- cause it’s important to share.

Grief is a strange sensation that can come in many different forms. People are different and cope in unique, personal ways. But I’ve found two techniques that have become the only ways that I know how to healthily grieve.

For some reason, when grief come about, our natural tendency is to abandon all things surrounding emotion and care in favor of ant activity or distraction. Instead of allowing emotions to be a priority, we would rather throw ourselves into work, school, chores, to-do lists, etc.

But in order to take care of yourself, you need to take time to address your emotions, do things that are good for you and find ways to cope. Pray. Read. Eat. Exercise. Talk. Play music. Sleep.

Do anything that you know will be helpful for your body and mind.

Now I’m not saying that you should completely abandon all responsibilities – you shouldn’t. But if you don’t take care of your body and mind, all other things will fall through.

The Lord is our ultimate comfort in times of grief. Go to Him no matter what you are feeling.

He can take it. He wants to take it for you as the loving father He is. But you have to surrender it to Him first.

“Give all your worries and cares to God, for he cares about you.” 1 Peter 5:7