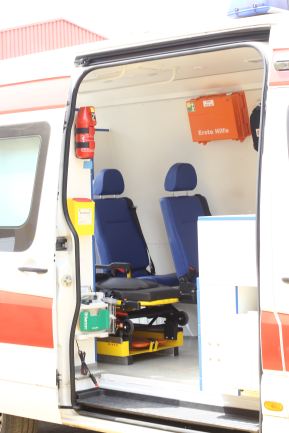 There are over 1.1 million high school students who participate in the game of football each year.

According to The National Federation of State High School Associations (NFHS), around two million injuries occur annually. Those lead to 500,000 doctors’ visits and 30,000 hospitalizations.

Despite these risks, no high school or college in the Unit- ed States is legally required to have emergency medical services present during football games.

Most schools do usually have an EMS certified per- son present at football games, but because it is not enforced by state law, the job is either a voluntary or low-paid position.

When a player is injured, the individual tasked with treating the player may be certified to do so, but without proper tools or the proper environment that an ambulance and team of EMS first responders provides.

Without those resources, there is only a certain amount that can be done for an injured player.

“It would be that much safer by having an ambulance there that will know what to do quicker than a coach or a trainer that is certified,” OBU journalism and mass media major, Harvest Court King and former high school foot- ball player Anthony Williams said.

“I think that it is really crazy that they [ambulances and EMS staff] are not at the games. All sporting events should have them present and I feel like there isn’t really a reason why there shouldn’t be a law saying that they have to be there.

According to The Center of Disease Control and Prevention, approximately one in one thousand high school athletes receive a traumatic brain injury within their four years.

“I think that it should even be a law that they are on the field,” Williams said. “I think they should be there to make the decision that if a player is too badly hurt in a certain area, then they shouldn’t get up […] or if they have a shoulder injury don’t take their pads off.”

“I feel like if you have to call the ambulance or have to go all the way outside of the stadium to get them that could not be good for the athlete.”

Although there are no states that currently have a law mandating that EMS be at football games, there are some states that are passing laws that are taking the physical wellbeing of high school football players more seriously.

in 2009, Washington became the first state to pass a law stating that if a player under 18 is suspected of having a concussion, then they have to be removed from practice and are not allowed to participate in games until they are cleared by a medical professional, according to an article in the Journal of Medical Emergency Services.

The same article explains that Pop Warner, the largest youth football organization in the world, requires the home team to provide medical coverage at each game.

“In the absence of a physician and or ambulance on site, the minimum safety requirement will be the presence of an individual associated with the home team/host organization who is currently EMT qualified or certified in Red Cross Community First Aid and Safety, the P.R.E.P.A.R.E. Course by the National Center for Sport Safety, or their equivalent,” read the article, quoting Pop Warner’s regulations.

In the year 2014 (the latest date that data was recorded), there were no known fatalities of any Pop Warner football players.