‘Pirate of Penzance’ makes waves on the Craig-Dorland stage 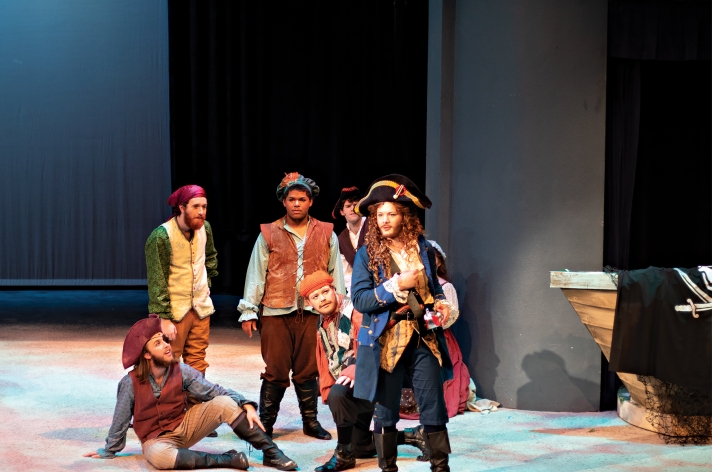 Augustus Mathews as the Pirate King, surrounded here by the Pirates of Penzance.

Last weekend, OBU Theatre and Music kicked off their run of Gilbert and Sullivan’s “Pirates of Penzance” in Shawnee Hall’s Craig-Dorland theatre. The final opportunities to see the show are this weekend.

The first impression that the audience receives from the production cast and crew is a warm welcome from all of the front of house staff.

The moments from stepping into Shawnee Hall and sitting in my seat were an effortless and kind experience with ushers, box office workers and more.

The show began with an overture performed by the accompanying orchestra, under the musical direction of Dr. Louima Lilite.

The score is inviting and fun, and it draws the audience into an air of mystery surrounding the journey they are about to embark on together.

The opening moments of music also gave insight into the high caliber of the quality of the production.

Fredric, the focus of the story, played by Courtlin Haygarth, was a joy to watch onstage. His youthful presence and tenor voice were absolute assets to the production. His movements and actions all seemed to be filled with the purposes of his character.

The entrance of the pirates was a very fun spectacle to watch. Each pirate had their own obvious personality.

One highlight of the production is Augustus Matthews as the Pirate King. Mathews brought a sense of swagger and power to the stage that complimented his character very nicely. The ensemble presence of the pirates was exciting.

For a smaller ensemble, the group felt much bigger on stage in personality and vocal performance.

Marlee Sedgwick, playing the role of Ruth, was a joy to watch. Her vocal prowess and impressive character act- ing were some of the highlights of the first act of the production.

Also of note, is the choreography by OBU alumnus Trevor Mastin. The moments of choreography in the show are precise and fun and add to the flair of the production. The choreography shines particularly in the second act of the show.

The premise of the show is that Fredric is leaving the pirates after an indentured servitude as he reaches his twenty-first birthday.

Fredric meets Mabel, one of the Stanley sisters, and fallen in love with her. But, a twist leaves Fredric in a bind.

Mabel, played by Anne Aguayo, was captivating from the moment she first took the stage in the first act.

Aguayo’s voice was completely controlled and clear. Her soprano voice was a wonderful addition to the production and was like the cherry on top of an ice cream sundae.

Overall, this production is filled with fun and chaos. It also show- cases the talents of the OBU students in a way that they might not usually get to perform.

The performance pro- vides a different theatre experience than going to see a traditional Broad- way-style musical. The operetta style is a new, exciting experience for theatre goers who have never experienced it before.

It is also a delight to see a live orchestra per- forming with the cast. Dr. Lilite’s conducting was joyous and a welcome presence on the stage.

Those wishing to see OBU’s production of “Pirates of Penzance “have this weekend to see the show.

Tickets are available online or at the box office in Sarkeys Telecommunication Center.