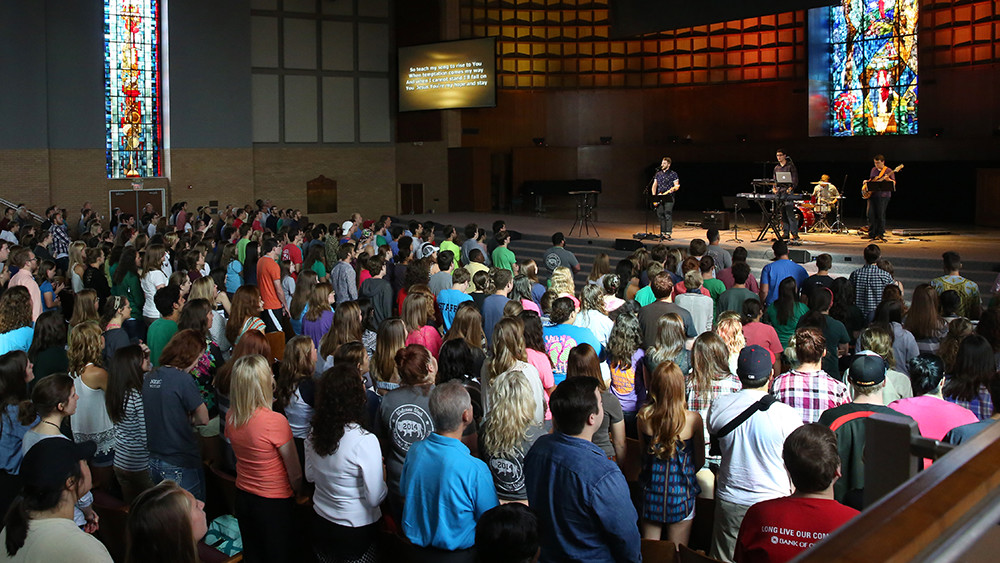 The church’s relationship with art has been turbulent at times over the past decades, but OBU’s Connect Chapels are helping, in their own small way, to change that.

The students and faculty involved in organizing this year’s Connect Chapels have made a concerted effort to include more artistic expressions of worship in their programs.

This has included poetry readings, by both students and faculty, the showing of visual arts pieces, and even rap and spoken word.

The inclusion of such expressions in the worship services has allowed students who might otherwise not be able to contribute to an event like chapel to be included.

The desire to begin including creative expressions of worship came out of a desire to shake things up. Heath McClure, who is one of the Co-Chairs of Chapel Crew along with Ivy Penwell, said that he and his team wanted to move away from some of the old models.

“Having been a part of Chapel Crew for three-years I have seen a wide variety of approaches to the idea of a student-led chapel,” he said. “At times it has leaned towards a somewhat bland model of student testimony only, with little else,” he said.

“While this has merit, it fails to capture the student body’s attention often and confines the idea of student representation to a small box in which a select few capable of speaking in front of others and with an appropriate story have the chance to share. Testimony is great but it loses its depth and value when it’s the only thing.”

Penwell, the other Co-Chair, agrees that it was important to include students who might not be as geared toward a traditional “church service.”

“One of our goals in chapel crew is to involve different types of majors and students in chapel, not just those who are gifted in worship or speaking,” she said. “We know that the Gospel can be so beautifully presented in a thousand different mediums.”

This idea fights against a kind of chapel “clique,” as well, against the same select students being on stage each week.

“We realized a large part of the student body was underrepresented and we desired to find ways to incorporate them,” McClure said.

Director of Student Ministry Clay Phillips, who preaches during Connect Chapels and who works with Chapel Crew to plan the services, is quick to point out that the credit for the artistic emphasis goes to the students.

“All of the credit goes to your peers on Chapel Crew for the ideas and creativity,” he said.

And while it was the students’ ideas, Phillips saw the potential immediately.

“I really felt like it was a great way to utilize the talents God has given to our brothers and sisters who are gifted in artistic ways,” he said. “Those talents aren’t always seen in our worship gatherings, so I thought it’d be a great avenue to allow them to be.”

All those involved with the services are enthusiastic about the results of the new artistic emphasis.

“[It’s] really been such an unexpected blessing this semester,” Penwell said. “We all know what it looks like to encounter the Holy Spirit in worship or in listening to a speaker, but to hear from Him by looking at a painting or by listening to a rap? It’s a little different, but it’s been really cool to see.”

Phillips notes that including art in the service is meaningful to all people, not just those students who are artistically inclined.

“They add to our worship of God in a way that people like me, who are not gifted with those abilities, can see Him in new and fresh ways,” he said.

Dr. Ben Myers, the Crouch-Mathis Professor of Literature, has become involved in the Connect Chapels, and has read poetry for the services a few times over the past year. He’s glad to see students using art as a worshipful expression, and especially poetry.

“Art is a gift from God — a reflection of His Truth, Goodness, and Beauty — and, like all His gifts, we should return it to Him as an act of worship,” he said.

Everyone involved in the chapel services is excited to see how this avenue of worship can be explored and expanded in the future.

“I hope that in future Connect Chapels we will continue to find new ways of highlighting the gifts God has given to our campus community, so that we can offer worship to Him in a way that gives fuller expression to who He is and what He does in and through us,” Phillips said.

“It has become a really beautiful way to see the Holy Spirit moving in a new and fresh context, through fresh people and fresh mediums,” she said. “I hope we keep doing stuff like this.”

McClure perhaps sums it up best.

“We have the privilege to steward elements of creation in such a way to utilize the members of the body to exalt the name of Christ,” he said. “We believe that any way we can get more students involved in this desire, the better, so we will continue to explore ways in which that can happen.”