Happening just two hours away from Shawnee, The Tulsa Race Riot of 1921 was one of the worst riots in American history. 35 blocks of Tulsa’s Greenwood district were burned to the ground, and one estimate said close to 300 people, blacks and whites, perished in just 19 hours.

For Black History Month we’re taking a look at what caused this event, and showing you a survivor’s retelling of her experience during the riot.

Written in the North Tulsa Oral History Project, this is what Rosa Davis Skinner’s husband Thomas R. Davis said to her in the early morning hours of June 1, 1921, when the Tulsa Race Riot started.

Thinking of the 1920s, one might conjure up images of jazz legends, flapper girls and Great Gatsby-esque parties.

All those things were present, but the 1920’s were also a time of heavy racial segregation in the United States.

Most cities were divided into sections: one side for blacks and one side for whites. Tulsa was no different. There was even a law in Tulsa that said a person of one race could not live in a neighbor that consisted of three-fourths or more of another race. North Tulsa was, and still is, where most of the black people in the city lived.

Tulsa’s segregation laws, while meant to demean people of color, inadvertently created one of the most well-known black communities in the United States: The Greenwood District.

With Tulsa’s growing community of black people, it became apparent that there needed to be places in which people could shop.

Soon Greenwood became a national icon of black self-sustainability, even so that the great Booker T. Washington referred to it as “Black Wall Street.”

“The evening before the Tulsa Race Riot began, my husband Thomas got up and told the [church] congregation about a vision he had. He said, ‘I don’t know what it’s going to be, but it’s going to be some kind of destruction.’”

Dick Rowland was a 19-year-old black man employed by a shoe-shining parlor on Main Street.

Sarah Page was a 17-year-old white teen who worked as an elevator operator in the Drexel building on Main Street.

On that day, in the late afternoon, these two would meet and ignite the flame that would soon burn 35 square blocks of Black Tulsa to the ground.

The Drexel building was the only one in the area with a restroom that black people could use, and Dick Rowland needed to use it. It was on the top floor, so Dick had to take the elevator, Sarah Page’s elevator, to get there.

The two likely knew each other, as Sarah’s elevator was the only one in the building and the building was the only place in which Dick could use the restroom. They, at least, could’ve recognized each other. They could’ve been in a relationship for all anyone at the time knew.

When Dick went to the elevator something happened, because an employee of a store on the first floor of the Drexel heard what he thought was a woman’s scream and then a black man run from the elevator.

The employee ran to help and found Sarah in what he saw as distress. Thinking the worst of the black man, he called the police.

The next day, the police found Dick Rowland in Greenwood and arrested him.

The white-owned newspaper the “Tulsa Tribune” released a story about his arrest that afternoon and, according to the Greenwood Cultural Center, might’ve also released an editorial saying he would be lynched that night (according to the Cultural Center, all copies of that edition of the paper have been destroyed, and the microfilm is missing the page the editorial would have been on, so this cannot be proven).

As word of the lynching spread through the white community, crowds gathered outside the Tulsa County Courthouse, where Dick Rowland was being held in the top floor jail (Rowland was originally being held at the Tulsa Police Department, but the police chief was fearful that the growing crowd would be able to overtake them there. When he was moved to the courthouse’s jail, the police disabled the elevator and set up a wall of officers at the top of the stairs).

The Greenwood Cultural Center’s website state that by sunset hundreds of white men were gathered outside in what looked like the beginnings of a lynch mob.

Once the black community heard of this mob, they too began gathering together to figure out how to rescue Dick Rowland from being lynched.

Some were prepared for war, while others were fearful that such violence would be devastating.

A group of black men left Greenwood for the courthouse with rifles to help the police protect Rowland from the white mob.

When the white men saw black men armed, they went to their homes to arm themselves.

Soon the streets surrounding the courthouse were filled with armed men of both races.

As more armed black men appeared around the courthouse, the white crowd saw this as an uprising.

Some time after 10 p.m., in all the confusion at the courthouse, a shot was fired.

A firefight ensued in response to that shot. It lasted not even a minute, but 12 men were killed, ten whites and two blacks.

The black crowd retreated to Greenwood, where the white mob, now numbering over 2,000, followed.

The Dead Baby in a Shoe Box

“A little after midnight, [my husband] woke me up and said, ‘Wife, it’s time for us to go! I told you something bad was goin’ to happen; well it’s happening now. A man just run by the house and he said, ‘Brothers, get your guns, get your guns, a riot has broke out.’

“When we got to Greenwood, we met up with a lot more black people who were running trying to find a safe place. We ran into a couple – the mane was one of Thomas’ best friends. The wife had just had a baby that died at birth. She had put it in a shoe box and was waiting until morning to bury it when the riot broke out. Well durin’ all that runnin’, and pushin’, and shovin’ when black people were trying to get safely away from the riot, that po’ little baby got lost! Everybody was just runnin’ and bumpin’ into each other. They never did find that baby.”

The official death count by the Oklahoma Department of Vital Statistics was 36, 26 black and 10 white victims. The Red Cross’ Disaster Relief Report from the incident said the number of deaths was almost 300.

What was known for sure was that the Greenwood District had been completely burned to the ground.

The State of Oklahoma’s official study of the riot states that “Not one of these criminal acts was then or ever has been prosecuted or punished by government at any level. 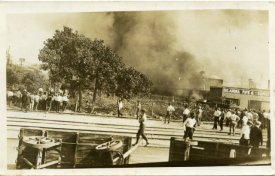 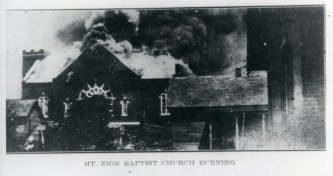 The Bison is here to keep the OBU community up to date with everything relevant to their experience. As an extension of the printed newspaper of the same name, you can get all the information from there and more on-demand right here! Be sure to bookmark us!