“For a few years, I’ve wanted to do an all-female play,” Gilbert said. “There aren’t enough strong female roles in plays, but Eleemosynary not only fulfilled that goal, it has a great message. In spite of the hardships of life, these women choose love.” 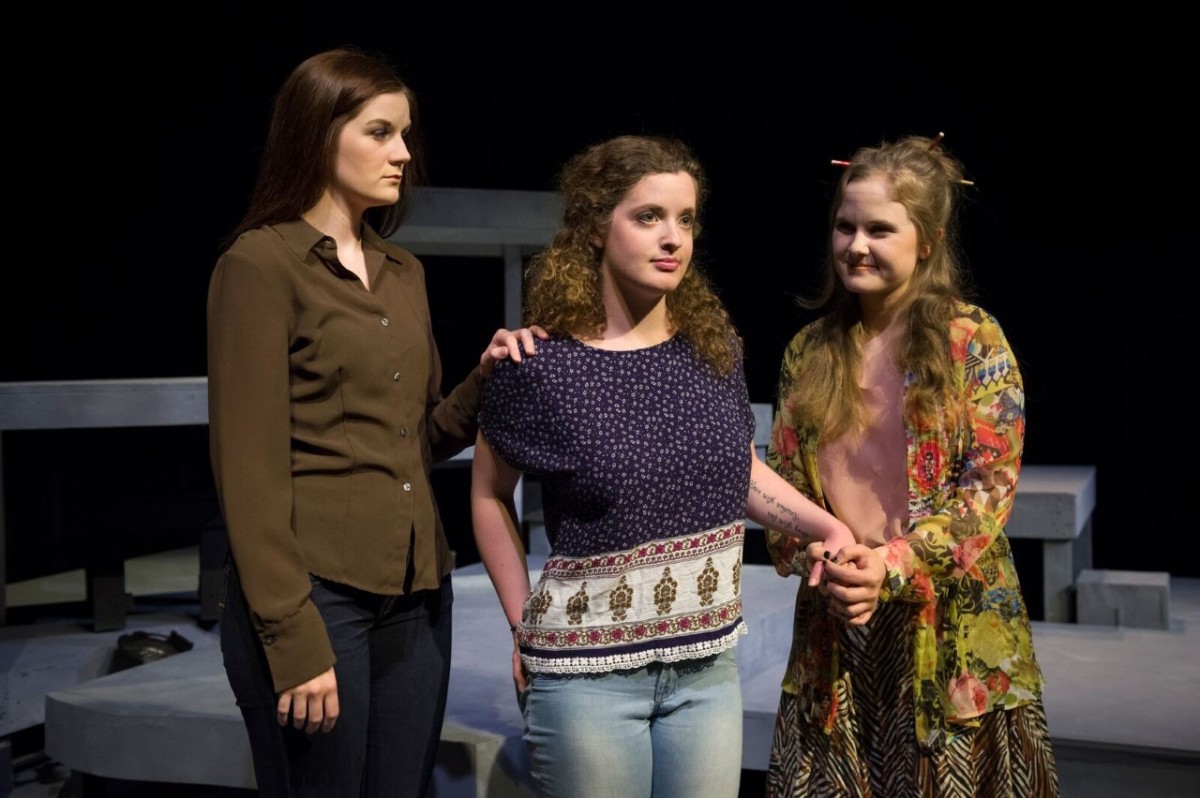 With emotions of stress and excitement rising on campus as summer arrives, one thing everyone could use is a little bit of love. Senior Conner Gilbert’s capstone play is just the remedy.

This Thursday April 27, Lee Blessing’s play Eleemosynary premieres in Craig Dorland Theater at 7:30 p.m. The play is theater major Conner Gilbert’s senior capstone project, and will continue throughout April 30. Tickets are $11 for adults and $5 for students.

“It’s honestly a show about just being a human,” Gilbert said. “The audience can expect some laughter, some tension, a few tears and comfort in that love triumphs over everything.”

Eleemosynary is most importantly a story of love between a family.

“It’s a journey of three generations of women in a family who have experienced grief and joy, and their struggle to come to terms with their past,” Gilbert said. “No matter the pain they’ve caused each other, or their need for an individual identity, they find themselves drawn back to each other through love.”

Senior theater major Taylor Lasseigne, who stars as Dorothea, became familiar with the play before auditions and was struck by its beauty.

“I love the way that this play presents these characters because they are raw and real and imperfect,” Lasseigne said. “I think it’s important to put imperfect characters on stage because people need to see that they are not the only one dealing with these struggles or who have faced these issues that the characters are dealing with.”

Gilbert believes the complexity of the characters is what makes this play special.

“What I take from Eleemosynary is that people are complex and that’s beautiful,” Gilbert said. “These women have their highs and lows, joy and anger, moments of peace and chaos. They are both bad and good, but throughout everything they still love.”

There are high hopes for the play, which is finishing its last few days of rehearsals.

“Honestly, I feel great, knock on wood,” Gilbert said. “This has been an amazing rehearsal process, and the amount of progress made is astounding.”

Lasseigne is tired from rehearsals, but she is excited for the show to premiere.

“We started this entire process before spring break, so we’ve been living with these characters and this story for a long time,” Lasseigne said. “I’m looking forward to finally getting to share this beautiful story with others.”

Gilbert appreciates the work of his fellow classmates and actors in preparation for this weekend’s premiere.

“There are moments where I laugh and where I cry because these actors dedicate themselves to showing the beauty of these women,” Gilbert said. “We are still putting together all of the elements that will make this an amazing product, but I’m hopeful it will go well.”

Two different actors, representing past and present variations of the character, play each character. Because of this, Lasseigne notes the difficulty there has been in rehearsals.

“I have had to learn to work with a counterpoint, and many of the decisions that were made about our character had to be made together, because she is the same person,” Lasseigne said. “That being said, there are differences between us not only because we are two different actors but also because our characters are separated by several years of age and life experiences.”

According to Gilbert, Eleemosynary, consisting of an all-female cast, is empowering and inspirational.

“For a few years, I’ve wanted to do an all-female play,” Gilbert said. “There aren’t enough strong female roles in plays, but Eleemosynary not only fulfilled that goal, it has a great message. In spite of the hardships of life, these women choose love.”

Despite the difficulties of directing, Gilbert believes the effort is all worth it to produce the best show for his team.

“Directing a fully-fledged production is a challenge,” Gilbert said. “It’s pushed me to be a better director and to do my best for the actors and production team.”

Eleemosynary premieres this Thursday April 27th, and will be offering multiple buy-one-get-one-free opportunities for everyone to enjoy.

The story of these three women is one that Lasseigne believes will connect with the audience and draw them in.

“These women are strong, independent, intelligent and full of so much love,” Lasseigne said. “Everyone can empathize with some aspect of this story. Bring tissues, [because] you’ll probably feel a lot of things.”