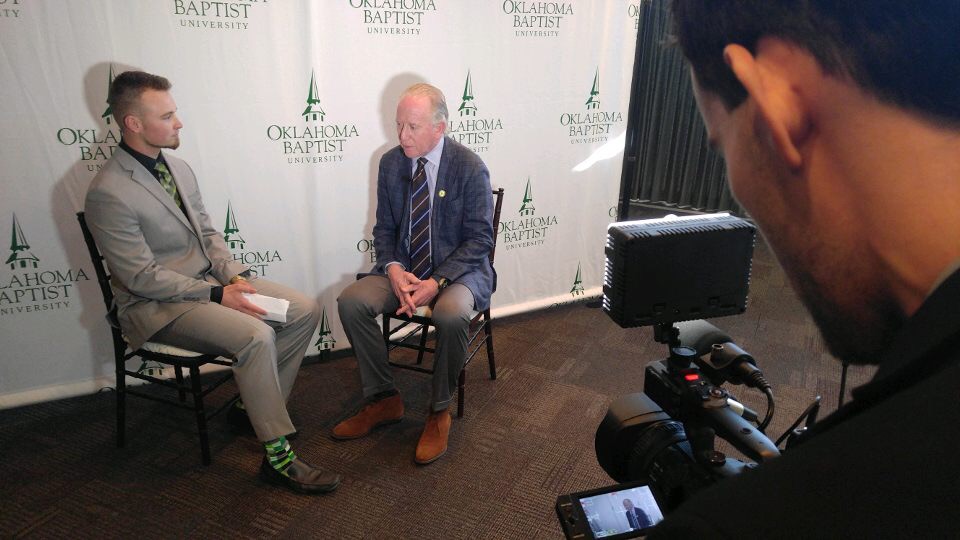 OBU was honored to host retired NFL quarterback and humanitarian Archie Manning as the main speaker at the Green and Gold Gala Tuesday night.

Manning, who played in the National Football League for 15 seasons, started at the quarterback position for the New Orleans Saints, (and then later with the Oilers and Vikings) after playing an impressive collegiate career at the University of Mississippi.

Manning is also notorious for being the father of NFL quarterbacks Peyton and Eli Manning. Despite an impressive college career, and two Pro Bowl appearances in the NFL, Manning did not hesitate to admit that he has seen his fair share of adversity.
“It was kind of a struggle. I loved playing the game, I loved playing the quarterback position, I loved playing for New Orleans, but you never get used to losing.”

The New Orleans Saints record during the time Manning was quarterback (1971-1982) was 49 wins and 119 losses. Despite the landslide of losses, Manning still found a way to be selected to two Pro Bowls, which is an honor for players who display excellence during a regular season. In the midst of a hard career, Manning remained positive about his experiences.

“I wouldn’t swap it for anything,” Manning said. “I was one of those kids that wanted to grow up and play [foot]ball, and I got to do it. I enjoyed the experience, the relationships I made, and the lessons I learned. The values I got along the way have always been beneficial to me. I don’t want to do it again…but I’m glad I did it.”

Manning not only faced adversity in football, but in his personal life as well. When he was in college, his father committed suicide, and left his wife, daughter, and Archie behind. Fast forward a few decades, Manning’s eldest son, Cooper, was diagnosed with spinal stenosis and was forced to quit playing football right before he started college. Through all this uncertainty, Manning said his faith is what got him through the hard times.

“Sometimes, dealing with some tough things makes it easier to keep your faith,” Manning said. “Sometimes we ask God things like, ‘Why did you take my father away from me at a young age; Cooper wanted to play college football so bad, why was that taken away from him?’ But, I was very fortunate to have parents that instilled faith in my sister and I at a young age. We had a strong faith, and it certainly served me well and helped me during my tough times in life.”

Due to the adversity and competitive nature that Archie Manning possesses, he made it clear that leadership is a necessary force in today’s age.

“Leadership is one of the paramount things in our society,” Manning said. “We all have to be leaders in some capacity. Sure, sometimes there’s people in a position above you, but still. We all have to take leadership roles whether it be at work, school, with our families or our friends. Its something that I feel is so important in our society, but I also feel that a lot of people think that it is lacking in a lot of areas, and it is something we all need to work on.”

Manning made it clear that he wants to be remembered as someone who was a good teammate, not only on the field but in life as well. He also offered advice for young individuals wanting to make a difference in society.

“I believe in that old saying, ‘The harder I work, the luckier I’ll get,'” Manning said. “I really believe that. So I think if you keep your priorities straight, and work hard, you’re going to accomplish some things.”